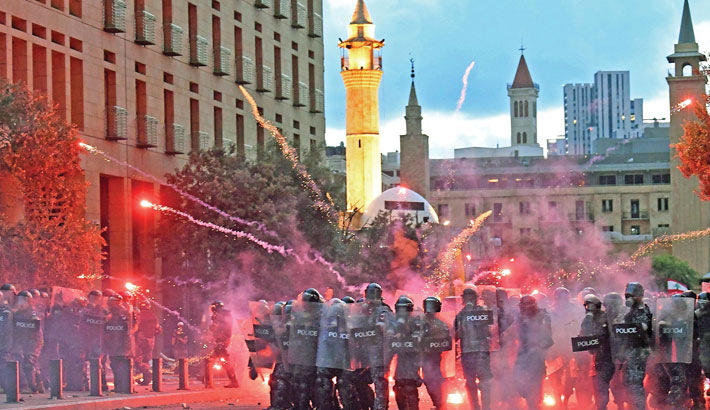 Firecrackers thrown by protesters explode in front of riot police amid clashes in the vicinity of the parliament in central Beirut on Monday following a huge chemical explosion that devastated large parts of the Lebanese capital. — AFP photo

BEIRUT: Protests have taken place for a third consecutive night in Lebanon’s capital, Beirut, amid mounting anger over the devastating explosion a week ago that reportedly killed more than 200 people, reports BBC

Clashes broke out near the parliament building, with demonstrators throwing fireworks and police firing tear gas.

A fire is believed to have caused the detonation of 2,750 tonnes of ammonium nitrate that had been stored for six years without safety measures at Beirut’s port.

The blast wave flattened nearby buildings and caused extensive damage over much of the rest of the city, leaving hundreds of thousands of people homeless.

Lebanon was already struggling with an unprecedented economic crisis before the disaster, with families pushed into poverty and hunger.

Since October, protesters have been demanding the complete overhaul of the political system, which they blame for government corruption and mismanagement.

Diab, a university professor who took office in January with the support of the Iran-backed Hezbollah movement and its allies following the resignation of the previous government, blamed last week’s blast on the entrenched political elite.

“Their corruption created this tragedy,” he said in a speech on Monday night. “Between us and change stands a thick wall protected by their dirty tactics.”

Diab said that his caretaker administration would “follow the will of the people in their demand to hold accountable those responsible for the disaster”.

The BBC’s Tom Bateman in Beirut says it is unlikely the mass resignation of the government will remove much heat from the protests, as Lebanon’s problems are only deepening.

A new prime minister will have to be chosen using the same system of sectarian politics at the root of many people’s complaints, our correspondent adds.

Meanwhile, the recovery operation is continuing on the ground in Beirut.

The UN said on Tuesday that the World Food Programme would be sending 50,000 tonnes of wheat flour to Beirut to “stabilise the national supply and ensure there is no food shortage in the country”, with 17,500 tonnes arriving within two weeks.

The head of the agency, David Beasley, warned on Monday that he was very concerned that Lebanon could run out of bread in about two-and-a-half weeks because 85% of the country’s grain was usually delivered through Beirut’s port.

Beasley said it was urgent to get the port up and running, and that he believed it could be temporarily operational in two to three weeks.

A port official noted that the container terminal suffered “minimal damage” and that on Monday night a ship docked there for the first time since the explosion.