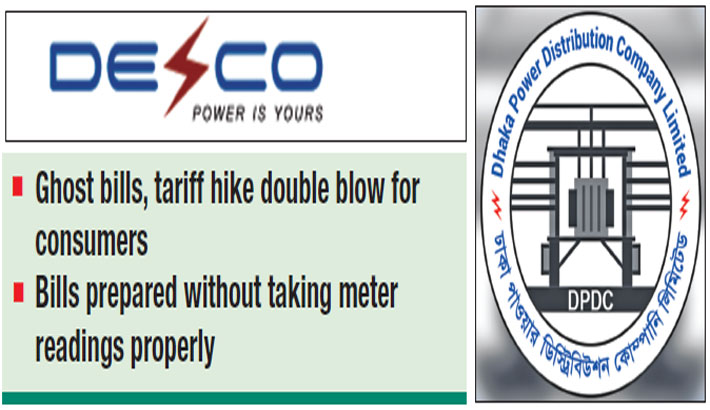 Electricity bill shocks are now spilling over to prepaid meter users as well even though it was a concern for postpaid meter users only for the last few months amid Covid-19.

“I had to refill a total of Tk 5,500 in a span of three weeks from mid of June to first week of July in my prepaid electricity meter,” Md Fahim, a resident of Uttara Sector-9 told this correspondent.

The subscriber under Dhaka Electric Supply Company Ltd (DESCO) informed that he had paid Tk 1000 in last March and Tk 2000 in April through his mobile wallet.

Sufferings first came from upward adjustment of power tariff from March this year while the second blow was unusual monthly billing by some power staff amid COVID-19.

“The current abnormal electricity billing annoyed me as my salary saw a significant cut while by expenditure has increased substantially,” Fd Fahim said venting frustration.

Despite the government instruction for providing accurate bills, consumers are facing same difficulty in paying their electricity bills due to abnormal bills.

Like Fahim, many Consumers of Dhaka Electric Supply Company (DESCO) have expressed disappointment over abnormal monthly power bills as they are receiving two to five times higher bills compared to bill of February, March and even April this year.

The same story was also found among the subscribers of Dhaka Power Distribution Company Ltd (DPDC).

“My electricity bill rose to Tk 2,423 last May, but my previous three months’ aggregate bill was only Tk 2,700,” alleged Sabiha Mariom, a housewife of Adabor area.

“I am also receiving unusual bill in the month of April,” former managing director of DESCO Md Shahid Sarwar, who served the company till March, 2020, told the daily sun.

“I think the company has hiked electricity bills 20 percent in each month from March considering the higher summer peak use as they failed to take meter readings since COVID-19 outbreak,” he said.

The government has already formed highly powered committee to identify the dishonest officials involved in different distribution companies and the committee found guilty of 290 officials.

The Departmental punishment has already been taken by different distribution companies, officials said.

Talking over the abnormal billing in May 2020, DESCO managing director Kawsar Amir Ali said they will investigate the abnormal prepaid meter readings in Uttara.

“We will adjust any extra bills in next month’s billing, if any faults are found,” he assured.

He added consumers might count the additional electricity bills as the government hiked the power tariff from March 1, 2020.

The energy regulator has raised the retail power tariff to 5.3 percent and wholesale tariff to 8.4 percent.

As per the new tariff, general consumers will have to pay additional electricity tariff of Tk 0.36 per kilowatt hours (kwh) on an weighted average.

Prof Shamsul Alam, energy adviser to the Consumers Association of Bangladesh (CAB), alleged that the commission has failed to justify the consumer rights regarding the power tariff hike.

“We’ve strongly protested against the power tariff hike as the hike is irrational,” he said.