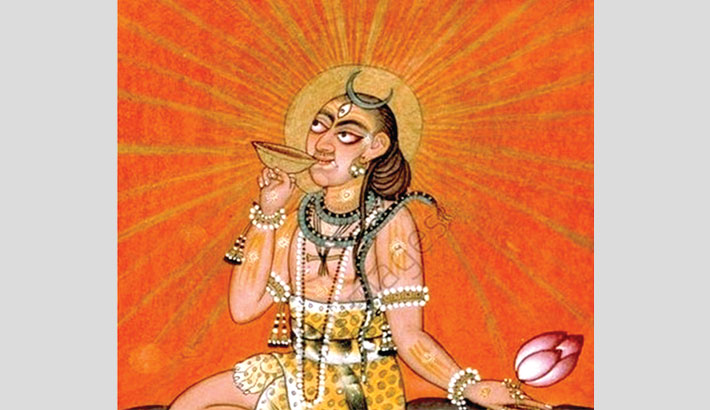 Traditionally,in our society those people who take wine are not much respected.but the matter of gods is certainly different. In Sanatan (i.e. Hindu) religion the place of wine is not so explicit as it was in ancient Greece. In Greek mythologyDionysus (Bacchus to Romans), was the god of wine and drink. He was very respected and equally important like Zeus, the king of Gods or Apollo, the god of sun. Besides Dionysus there were other gods of drink. Ægir and his daughters were famous for their ale. The pot in which it was prepared had such magical power that it never went empty and was always refilled automatically. Osiris (an Egyptian god) was originally a goddess associated with making bread which basically was a female function and as bread was used to make beer, she became a beer deity.Teshub, Nin-kasi, Tezcatzontecatl, Sucellus, Yi-ti, MbabaMwanaWaresa etc. were also known as gods of drink in different ways.

The Vedas define consumption of alcohol as a sin and special punishment of hell has been prescribed for people who drink alcohol. Intoxication is considered as marks of sinfulness, weakness, failure and destruction (Atharvaved). Drinking has been defined as a crime like theft, adultery, murder, abortion, dishonesty etc.(Rigved).

Whatever be the scriptural provisions, the name of Soma is known as the god of wine but likeDionysushe could never attain that influential position among Hindu gods. Experts have shown that later on his position was shifted to Chandradev (the moon). It can be assumed that drinking party was arranged under moonlight. It was never allowed in daylight.

It is beyond doubt that Soma was at the top position in the mythological world of intoxication and beverage. His own brand was based on the moon. It is believed that in old days the moon overflowed with dazzling Somaand gleamed as brightly as the sun. It was also known as The Cup of Somaand all the gods created a noise to get it for instant immortality. Over the years supply of Soma plant reduced and the bright moon faded and just some dregs are left. As believed, the beverage master is now simply a potter around on the moon having the name Chandra.

In the premises of mythology the first thing we notice is chunning of the sea (Samudramanthan in Bengali, no English word is sufficient to convey the actual connotation) which was done for nectar. In that tug of war between gods and demons, ahead of nectar many other things (poison, flower, elephant etc.) and  Varuni (a drink in female form) emerged from the sea, As the demons did not accept her they were named as asurs and as gods accepted her they were known as surs. Abode of gods is known assurlok (heaven). One thing is clear that the demons had strong sense because they had no evil intention to be drunk.

There are instances of crossing limit drinking wine in Mahabharat. Balarm’s (elder brother of Sri Krishna) liking for wine was well known. From Brahmapuran we come to know that after drinking Balaram, his friends and gopinis(milkmaids) participated in gay partie. In a story (Third Dice Party) by Parshuram (Rajsekhar Bose) an imaginary competition of game of dice has been narrated where Balaram is the central character. Arriving at Hastinapur (at present in Uttarpradesh, India) he said, “ I have heard that you have arranged a game of super fun. I don’t want to see war between the Kauravs and the Kauravs. Rather, I want to enjoy the game but I shall not stay here. If we  two brothers stay here it may be considered as partiality. Better, Krishna will stay here and I shall be a guest of Durjodhan because there is no satisfactory arrangement of drink here.” Though not supported by scriptures, Parshuram could easily realise the spirit of Balaram.

However, the most scandalous event in Mahabharat after drinking is the civil war of the Yadavs. Their chaos after drinking reached such a level that the whole dynasty was destroyed but it but it is thought that curse of Gandhari was also a factor behind it. Morale of this episode may be  that reckless drinking may bring destruction.

A very attractive description of drinking party in bars of the city of Karnasubarna is found in Gaurmallar, a historical novel by Sharadindu Banerjee. Regarding Bengalees’ craze  for drink NiharRanjan Roy has shown in his History of Benglees that bars have been referred to in many verses of Charyapad. He assumed that drinking was not considered as shameful among the Buddhist monks but creating chaos was always hated.

The hassle between Nityananda (Nimai) and the two wicked brothers JagaiMadhai may be remembered. If they were not involved in a tussle with Nimai they could not rescued from their sins. So, though indirectly, drink has a role here. Expansion of Shakta community (a sect of the Hindus) in Bengal during Sri Chaitanya and afterwards made the practice of drinking an ordinary affair. Against anti drinkingVaishnabs, Shaktas were supporter of drinking. Even Ramprasad, in his lyrics has written - ‘We don’t drink wine but consume sudha sayingJai Kali’ i.e. alcohol becomes nectar if drank in the name of Mother Kali. Probably for this reason Kali brand bottles of local liquor is available at cheap rate and commonly popular all over India.

Apart from scriptures drinking in Bengalee society prevailed more than 150 years ago. During British rule the Bengalees learnt to drink sherry and brandy which we learn from HutomPaycharNaksha by KaliprasannaSingha. Mark Forsithe, historian of drinking has written in his A Short History of Drinking that alcohol played a vital role before the arrival of life on earth  Primitive men picked fruits from trees for meeting hunger and at the same time they fermented fruit juice to transform it into alcoholic nature.

Ramchandra, the hero of Ramayan, is almost a god like character among the Hindus but there is a drink named Rum (or Rhum).It is a distilled alcoholic drink made by fermenting molasses or sugarcane juice, prepared mainly in sugarcane producing countries including India.In 7th century AD,Vagbhat, an Indian Ayurvedic physician suggested his patients to drink non-purified liquour like rum and wine blending with mango juice. Shidhu, a drink produced by fermentation and distillation of sugarcane juice, is mentioned in other Sanskrit texts. The Vedas is regarded as the most sacred scripture of the Hindus but treatment of drink in Rigved (alsoAtharvaved)and Ayurved stands contradictory.

Is it at all possible to make a combination of god and alcohol? For answer let’s try to know something about KaalBhairav, the God who drinks liquor (as believed). He is a fierce manifestation of Lord Shiv whose consort is Bhairaviand soal known as protector of the universe. Temple of Shiv is found in many places of Bangladesh, India, Nepal and Sri Lanka. The most famous one is the Kaal Bhairav Temple of Ujjaini (Madhya Pradesh, India). Devotees believe that he is the protector of that temple. When closed the keys are placed near his statue so that he can guard the temple. It may appear difficult to believe that here liquour is offered as a symbol of devotion. Outside the temple vendors sell bottled liquouralongwith flowers, coconuts and other offerings.

Apart from these Varuni, the consort of Varun,has been mentioned asgoddess of wine in Vishnupuran and also in Rigved but she is not so important in the realm of gods,