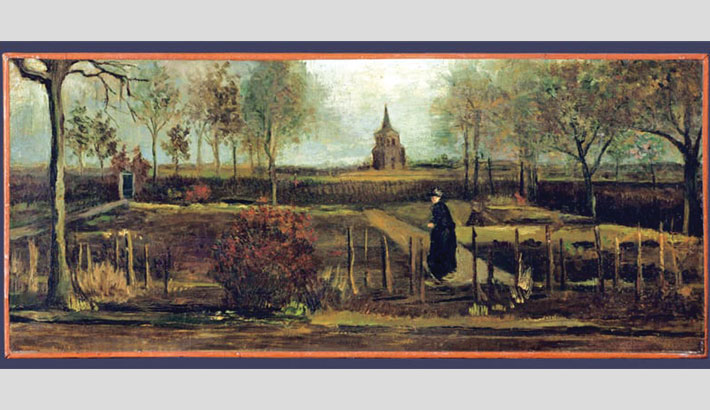 A painting by Vincent van Gogh with an estimated value of up to £5m has been stolen from a Dutch museum currently closed due to the coronavirus pandemic, reports The Guardian.

The thieves took Van Gogh’s Parsonage Garden at Neunen in Spring after smashing through the front glass door of the Singer Laren museum, in Laren, at around 3:15am on Sunday morning. No other art is believed to be missing.

The burglar alarm had been triggered by the break-in but the thieves had fled by the time police officers arrived.

During a press conference broadcast on Youtube, the museum’s director, Jan Rudolph de Lorm, said he was “incredibly pissed off” by the loss of the painting, which had been on loan from the Groninger Museum. The painting was stolen on the day Van Gogh was born 167 years ago.

De Lorm said: “This is exactly what you don’t want as a museum that has a painting on loan. “A beautiful and moving painting by one of our greatest painters, stolen from the community … This must come back as soon as possible, so that we can enjoy and be comforted by this

“Art deserves to be seen and shared by us, the community.”

Arthur Brandt, an art detective, told the Algemeen Dagblad newspaper that the artwork could be worth up to €6m (£5m). However, another work from Van Gogh’s Nuenen period sold recently for about £10m at a Dutch auction

The work was part of the exhibition Mirror of the Soul, an exhibition of more than 70 Dutch paintings, watercolours and drawings from the 19th century.

The museum was closed on 12 March in line with national measures to halt the spread of the coronavirus.

The Groninger Museum, located in the northern Dutch city of Groningen, said in a statement: “The work from 1884, oil on paper on panel is the only painting by Van Gogh in the collection of the Groninger Museum.

“We are very shocked by this news. The investigation is currently in full swing and no more can be said about it due to the police investigation.”

The painting of a vicarage garden is one of a series of works by Van Gogh between 1883 and 1884 when he was with his parents in Nuenen, where the Dutch artist’s father was a minister.

In a statement, a police spokesman for the Gooi and Vecht region said art robbery experts from the national criminal investigation department would help in the investigation. The painting has been added to Interpol’s international list of stolen works of art.

The Singer Laren museum showcases the original collection of American artist and collector William Singer and his wife Anna.

In 2007, thieves stole seven statues from the museum’s garden worth an estimated €1.3m, including a cast of the statue The Thinker by the French artist Auguste Rodin.

The statue was later found in a damaged state. In 2010, the two thieves responsible were sentenced to prison for four and four and a half years, reduced on appeal to two and nearly three years imprisonment.