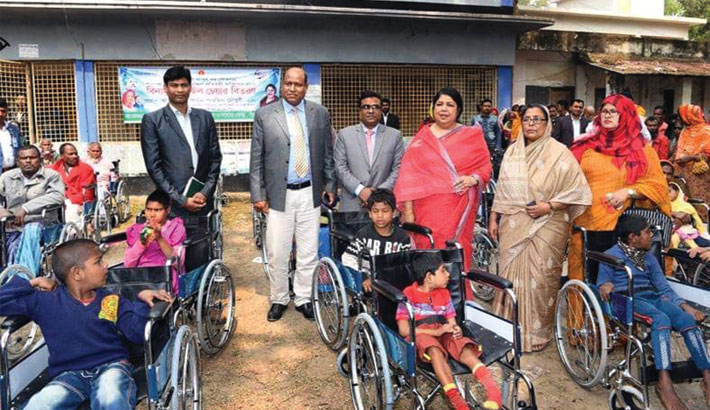 Jatiya Sangsad Speaker Dr Shirin Sharmin Chaudhury along with people with disability poses for a photograph at the wheelchair distribution programme in Pirganj upazila of Rangpur district. — SUN PHOTO

Jatiya Sangsad Speaker Dr Shirin Sharmin Chaudhury on Thursday said the participation of women in every sector is now visible in the development of the country.

“All should come forward to enhance the participation of women in the mainstream economy. A Sonar Bangla will be established soon when the young women society comes forward to contribute to the political and economic activities simultaneously,” she said.

The Speaker made the comments while addressing a discussion programme in Pirganj upazila of Rangpur district from where she was elected.

Dr Shirin Sharmin said Prime Minister Sheikh Hasina has turned the country into a role model of women empowerment in the world.

Appreciating women’s role in the development of country, she said, “The role of women of the country in the struggles for freedom and all democratic movements, including the language movement, is extraordinary and highly commendable.”

The women society should move forward being imbued with the ideology of Father of the Nation Bangabandhu Sheikh Mujibur Rahman to realise his dream of building a prosperous Sonar Bangla, Speaker said.

Dr Shirin said, “Those, who believe in the spirit of Bangabandhu, Independence and War of Liberation, will be able to strengthen the hands of Prime Minister Sheikh Hasina.”

In a separate programme, the Speaker distributed wheelchairs among 45 people with disability of all 15 unions in Pirganj upazila of the district.

Besides, Dr Chaudhury as chief guest also distributed cheques among unemployed male and female youths under the Bangabandhu Youth Loan Programme on the occasion of the centenary birth anniversary of Father of the Nation Bangabandhu Sheikh Mujibur Rahman.