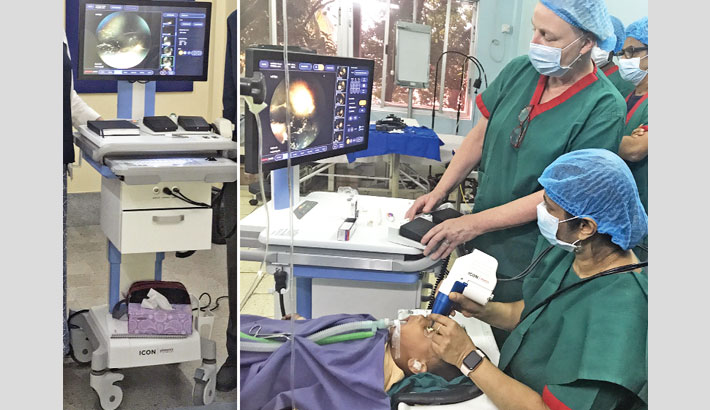 The latest equipment to provide better treatment for Retinoblastoma, children’s eye cancer, patients has been installed at Chittagong Eye Infirmary and Training Complex (CEITC) in the port city recently.

The equipment titled ICON-2 Fundus Camera, first of its kind in this subcontinent, was brought from United States of America (USA) to set up at the specialsed hospital.

Rotary International, Rotary Club of Meerbusch (Germany) and Rotary Club of Chittagong Khulshi jointly funded and cooperated to set up the device medical equipment at the department of Orbit, Oculoplasty and Ocular Oncology of the CEITC.

Another important device ‘Transpupillary Thermo Therapy (TTT)’ was also installed at the department and it is the second of its kind after the National Eye Science Institute and Hospital in the capital.

US Biomedical Engineer Miss Elizabeth Affle installed ICON-2 and trained the doctors and technicians of the hospital, sources said.

The authority procured the ICON-2 at a cost of Tk 93 lakh and TTT at Tk 35 under a two-year project titled ‘Fighting small children blindness under six’.

The hospital authorities said the Retinoblastoma disease is increasing day by day across the globe and treatment of the disease is expensive.

Many third world countries lack the medical facilities for the treatment while developed ones are also facing problems to control it, they said.

Retinoblastoma is a rare form of cancer that rapidly develops from the immature cells of a retina, the light-detecting tissue of the eye. It is the most common primary malignant intraocular cancer in children, they observed.

In many countries, affected eyes of the children are removed permanently to ensure their survival due to lack of the medical facilities.

Physicians said Retinoblastoma is curable disease if it can be diagnosed at primary stage. ICON- 2 has mainly two functions and the first one is to diagnose Retinoblastoma, Retinopathy of premature children and other diseases of retina, and secondly it gives follow up to the doctors about the eyes for further treatments.

It has a high resolution camera which can take pictures till 100 degree from eyes while normal Fundus Camera can take 40 degree. Besides, ICON-2 will provide the both pictures and videos of patients without any side effect.

The latest device of the world also can be used for diagnosing patient without making them senseless.

The CEITC will charge of Tk 500 to Tk 1,000 for the services using ICON–2 and poor patients will have its service free of cost, said the authority.

Rotary Club of Meerbusch (Germany) President Gregor Konig is the initiator of installing ICON- 2 at the CEITC.

Gregor and his wife Monica Konig jointly run an organisation named ‘KAKS’ for children’s eye cancer and they provided a scholarship to physicians to train them in Retinoblastoma as a part of the project.

CEITC sources said Gregor came forward to make awareness and assist in the treatment after his daughter was affected by Retinoblastoma and he couldn’t manage any proper treatment for her.

His daughter’s one eye had to be removed eventually and remaining eye had been under therapy to protect it.

Since then, he realised to install a potential device like ICON-2 in third world country as they will not manage to install it.

He started contacting with Rotary Club of Chittagong Khulshi to set up the device in the port city and finally CEITC Managing Trustee Professor Dr Rabiul Husain cooperated Gregor for this noble gesture.

On the other hand, the TTT, also called Thermal Laser, has multifunctional systems in eye cancer treatment. TTT is used to provide treatment for ocular cancer such as Retinoblastoma for children and choroidal melanoma for adults, retinopathy of prematurity and vascular diseases of retina.

The device is very much potential to cure Retinoblastoma during primary stage of the disease.  CEITC Oncology department Ocular Oncologist and Oculoplastic Surgeon Dr Soma Rani Roy said ICON-2 is the latest device of the world for Retinoblastoma treatment while TTT is also important one to cure the disease.

“We are very much pleased to have the device at CEITC and it will definitely leave a great impact on children’s eye cancer treatment and no child will have to sacrifice their eyes at beginning stage of life,” she hoped.

The famous Oculoplastic Surgeon who also received special training on Retinoblastoma with a scholarship said that there is an integrated treatment system at the CEITC and the new devices will help make the treatment easy and potential for the patients.

“Many children have to sacrifice their eyes after suffering from the eye cancer just because of not having latest device to diogonise the disease and treatment in proper time. Even some eye hospitals or physicians suggest to remove the eye as they have no option to cure the patients,” Dr Soma said.

“We get eight to 10 patients of the Retinoblastoma disease in a month while it stands at around 50 in a year. But, but the number is increasing day by day and the newly installed devices will support in future in this regard,” she said.

Mentionable, CEITC was established in 1973 to provide eye treatment to the people and it completed around 12 lakh eye surgeries since then.

Currently, it has 13 blocks on around 200,000 square-feet floors with 100 beds, 35 cabins, nine operation theatres and outdoor and emergency services.

CEITC has 45 physicians and 350 staff to serve the patients while different foreign teams also visit the hospital to provide treatments and run eye related awareness programme.