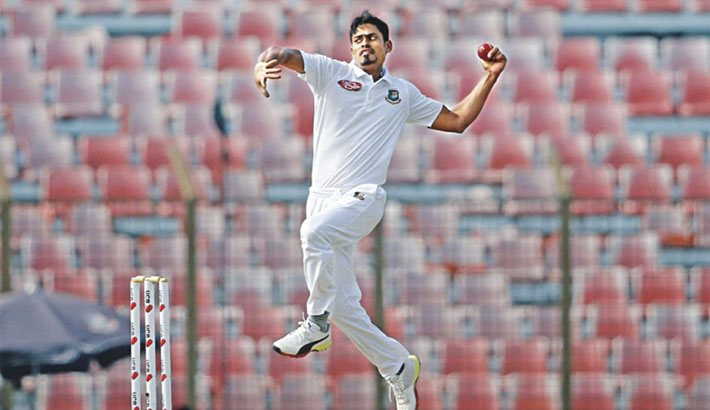 Bangladesh left-arm spinner Taijul Islam admitted on Tuesday that the spin department is struggling due to the absence of Bangladesh all-rounder Shakib Al Hasan.

Bangladesh Test team are certainly under pressure against the Zimbabweans considering their longer-version form in the recent past as they have earned five innings defeat in their last six Test matches.

Their performance in the absence of is certainly something to think about as in all the three Test matches they were humbled by their opposition with an innings defeat.

“Probably we are not good spinners. We are not like Shakib bhai, it’s the truth and that my answer,” Taijul told reporters at Mirpur on Tuesday admitting that they are feeling the pinch of losing Shakib, who is banned for failing to report corrupt approaches.

“If Shakib bhai will play; our result would have been better. We need players like Shakib bhai but we do not have that quality player now,” he said.

Taijul added that they are well aware that Zimbabweans can be dangerous on their day and can make them pay heavily like the way they did in Sylhet.

“I won’t say will not tell that was an accident (loss against Zimbabwe in Sylhet). An accident is a different thing,” said Taijul.

“We played badly and we lost. We played well in the next match and we won and it was not like an accident,” he said.

“We have to play good cricket to win or else we will lose,” he said. The left-arm spinner said on Tuesday that he had taken wickets against all the opponents he played and also looking forward to playing against Zimbabwe in the upcoming test matches.

Taijul is the most experienced bowler in the Bangladesh Test team and also the leading spinner in the side.

Taijul’s career-best 8-39 came against Zimbabwe, a performance that made him the premium spinner of the country.

“It’s not that I only picked up wickets against Zimbabwe. Against other opponents too, I took wickets. As I said earlier, you have to land the ball in the right areas, whatever the opponents are. If you can’t bowl well, even the Zimbabwe batsmen would hit you,” Taijul said on Tuesday after Bangladesh’s practice session.

Taijul looks relieved as they will be playing at home conditions after a series of defeats in Test cricket.

“It doesn’t matter who the opponents is, we must win a Test. It is very important to win the Test. If we can win, our confidence level will be enhanced, which at the moment is really crucial for us,” he said.

“When we play at home condition, it gives us some relief. But at the same time, everybody wants us to win when we play at our home. I think it is natural to do well at home,” he concluded. The only Test match starts between Bangladesh and Zimbabwe on February 22.