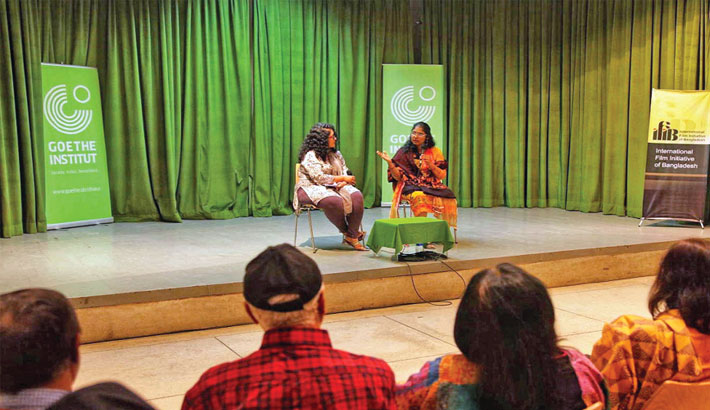 International Film Initiative of Bangladesh (IFIB) representative Lubna Sharmin introduced the filmmaker Mrittika Goon, along with film critic, journalist and the moderator of the Q&A discussion session Sadia Khalid, to the audience at the screening.

While sharing her experience on filmmaking as a debut director, Mrittika Goon said, “Kalo Megher Vela is a philosophical fiction and an adaptation of my father, poet Nirmalendu Goon’s novel of the same title.”

She further explained: “I wanted to show the chaotic aspects of the city life through protagonist Dukhu’s struggling slum life who flees the city and takes asylum in nature to escape the abuse of his stepfather, leaving behind his beloved mother.  There he discovers his life’s philosophy: that the path to freedom is blocked by emotional attachments.”

Mrittika summed up the message she tried to express through her debut venture in the following words: “In order to listen to the call of the soul, one must release themselves from the bondage of love.”

Mrittika Goon claims that the story of 'Kalo Megher Bhela' grabbed her attention in her very childhood when she had first read it and eventually got lost in her imaginary world surrounded by the story. Since then, she had been nurturing her desire to make a film on it and in 2015 she got her chance as the government approved grant for the film.

The screenplay of the movie was done by the late Faruk Hossain. Maximum of the shooting was done in Nirmalendu Goon’s ancestral village Barhatta in Netrokona district and the rest was shot in Kamalapur Railway Station and Tejgaon.

The screening was jointly organised by Goethe-Institut and IFIB as part of their monthly film screening and discussion series “Through Her Eyes - A space to watch and discuss films with women filmmakers of Bangladesh”.