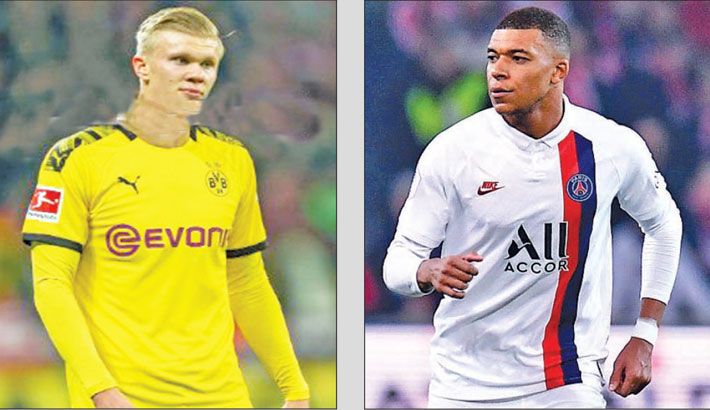 At just 21, Kylian Mbappe is already a World Cup winner while at only 19, Erling Braut Haaland has emerged as a rising fast-star this season.

As Cristiano Ronaldo and Lionel Messi approach the end of their careers, could Mbappe and Haaland be the next duo to dominate football?

Haaland had barely arrived last month in Dortmund when the records started tumbling.

He justified the 20 million euros ($22 million) Dortmund paid Salzburg by becoming the first player to score a hat-trick on his Bundesliga debut.

Having scored 28 goals in 22 games for Salzburg, including eight in this season’s Champions League group stage, Haaland picked up in Germany where he left off in Austria. He made his debut coming off the bench with his new team 3-1 down at Augsburg in mid January. His clinical finishing produced three goals in 20 minutes to seal a 5-3 victory.

The teenager was praised by Dortmund’s sporting director Michael Zorc, yet calmly replied: “You signed me to score goals”.

Another two followed in a 5-1 rout of Cologne, then Haaland grabbed two more goals when Union Berlin were crushed 5-0.

He claimed his eighth goal in four games in Dortmund’s German Cup defeat at Werder Bremen.

The Norwegian teen netted again in Friday’s 4-0 thumping of Eintracht Frankfurt to extend his own record to nine goals in six games for Dortmund.

Though Haaland himself sees Mbappe as a role model.

“When I was in Salzburg, I started scoring goals, but I look at Kylian Mbappe banging in Ligue 1 goals, so you can always reach a higher level,” Haaland told Bundesliga.com.

For a player who turned 21 in December, Mbappe’s achievement’s are astonishing.

The World Cup winner is also France’s reigning player of the year and has won three Ligue 1 titles with two different clubs.

Mbappe recently reached a century of club goals, and his 19 in the Champions League is a record for a player before his 21st birthday.

The second youngest player to score in a World Cup final after Pele, Mbappe hit double figures for Champions League goals before he had even turned 19.

By that time he had already become the second most expensive player in football history when PSG signed him from Monaco for a total reported fee of 180 million euros ($215 million).

Mbappe has been to Dortmund’s Signal Iduna Park before. He scored twice when Monaco drew 3-3 there in the 2017 Champions League quarter-finals, a match postponed by 24 hours after a bomb attack on the Dortmund team bus. He scored another in the return leg as Monaco advanced to the last four.

At that time, he was the teenage sensation. Now, he is a World Cup winner and is PSG’s top scorer this season with 24 goals.