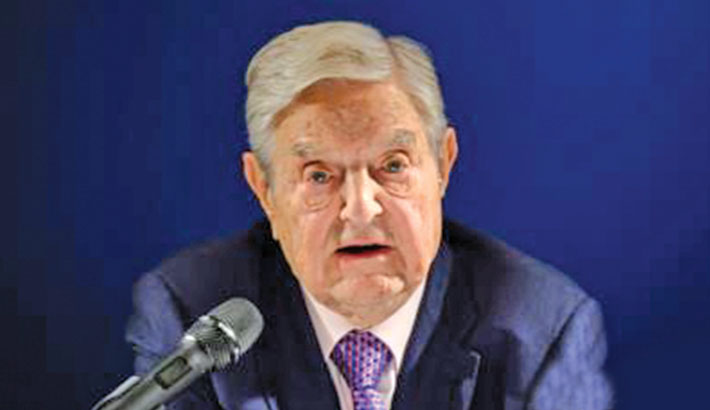 Billionaire philanthropist George Soros has launched a stinging attack on the “authoritarian rulers” of both the US and China.

He said President Donald Trump was a “conman and the ultimate narcissist” who had breached the limits of the US constitution, reports BBC. And he said China’s President Xi Jinping was using technology to exert total control over Chinese life.

“The world would be a better place if they weren’t in power,” Soros said.

Using his annual speech at the World Economic Forum, in Davos, the financier warned of a growing threat from populism and climate change, while pledging $1bn towards a new global university network to tackle intolerance.

But the businessman - who is a major donor to the US Democratic party - said Beijing and Washington posed the biggest threat to “open societies”.

“Both [leaders] try to extend the powers of their office to its limit and beyond.

“Trump is willing to sacrifice the national interests for his personal interests and he will do practically anything to win re-election.

“By contrast, Xi Jinping is eager to exploit Trump’s weaknesses and use artificial intelligence to achieve total control over his people.”

He was referring to two controversial decisions made by Modi’s Hindu nationalist government.

The first was to strip the disputed Kashmir region of its semi-autonomous status and place it under virtual lockdown.

The second is the introduction and passage of a controversial citizenship law that critics say is discriminatory towards Muslims.

It seeks to fast-track Indian citizenship to non-Muslim minorities from three nearby Muslim-majority countries.

The US and China recently struck a deal to de-escalate a major trade war which has seen both sides impose tariffs on billions of dollars worth of exports.

But Soros said President Xi’s had stifled China’s economy, while Trump had “overheated” his.

“US stock markets are high but can’t be kept at boiling point for too long.”

Soros, a Jew who survived Nazi occupation by forging identity documents, became infamous for his involvement in the devaluation of the British pound, known as Black Wednesday.

But it is his philanthropic and political activities that have made him a divisive figure in the US, Europe and beyond.

He has spent billions of his own money funding human rights projects and liberal democratic ventures around the world, and has become a frequent target for criticism by right-wing groups due to his support for liberal causes.

Much of the criticism aimed at him has been criticised as having anti-Semitic undertones.

The financier, who is a regular at the elite World Economic Forum, said his new university network would help promote “critical thinking” in an age of intolerance.

The move will be seen as a riposte to Hungarian President Victor Orban, who has repeatedly tried to shut down the Central European University, a private institution set up by Mr Soros in the country in 1971.

Orban’s populist nationalist government claims Soros has a secret plot to flood Hungary with migrants and destroy the nation, an accusation Soros denies.

Soros said the network would be “the most important and enduring project of my life and I should like to see it implemented while I am still around”.