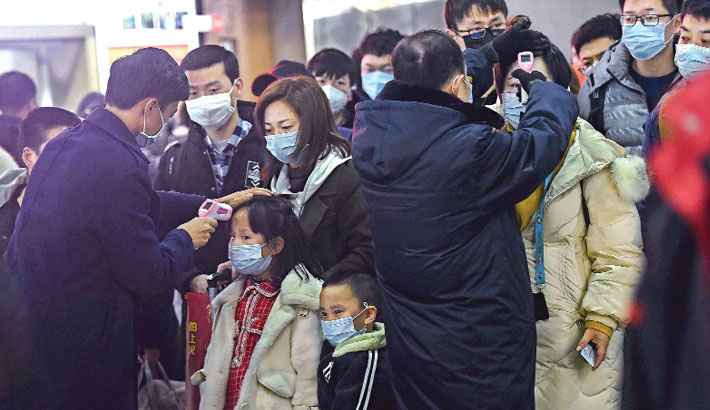 Staff members (in black) check the body temperature of passengers after a train from Wuhan arrived at Hangzhou Railway Station in Hangzhou, China’s eastern Zhejiang province on Friday. —AFP PHOTO

BEIJING: China’s bid to contain a deadly new virus by placing cities of millions under quarantine is an unprecedented undertaking but it is unlikely to stop the disease spreading, experts warn, reports AFP.

The contagious virus has already reached elsewhere in China and abroad, and even an authoritarian government has only a small timeframe in which trapped residents will submit to such a lockdown, they say.

“I think we have passed the golden period of control and prevention,” said Guan Yi, an expert on viruses at Hong Kong University.

China began its campaign on Thursday, cutting off all transport links out of Wuhan, a city of 11 million people where the coronavirus linked to SARS emerged late last year.

A cascading number of nearby cities has since been added to the travel blacklist, corralling more than 40 million people in a bid to stop those with the disease travelling and infecting others elsewhere.

However, with the death toll at 26 and infections being detected as far away as the United States, there are fears the exercise is too little too late. Yi, who returned from Wuhan just before the lockdown, pointed out huge numbers of people would have already left ahead of the Lunar New Year holiday, which began Friday.

They could have been incubating the virus “on their way out of Wuhan”, he said.

Symptoms could take several days to emerge—effectively seeding a health time-bomb across the country and abroad.

Meanwhile, new gaps in the security web in Wuhan and its surroundings will likely emerge over coming days, even as China deploys its formidable security forces. They are manning road blocks that have been set up, while train and plane services have been suspended.

“Especially people with money and connections, they’re going to make a run for it... and they’ll probably be successful,” Zi Yang, a senior analyst at the S. Rajaratnam School of International Studies in Singapore, told AFP.

University of Sydney associate professor Adam Kamradt-Scott, an expert in global health security, said only a “handful” of countries could conceivably pull off the mass quarantine.

He suggested the US was one of the few that may be able to mount a similar operation, using the National Guard, although it would face much stiffer opposition from a population accustomed to more civil liberties.

China’s communist rulers draw on a deep well of public acquiesence—partly due to control of the internet, no free press and a brutally efficient security apparatus.

“I can’t imagine there would be too many countries that would be able to do something on this scale as quickly as China has done,” Kamradt-Scott said.

Even so, Kamradt-Scott warned a lockdown that extends for a week or more would produce “growing levels of discontent and frustration”. “The Chinese authorities will be conscious of that, I’m sure, and they’ll be monitoring it very closely to avoid the risk of any sort of social unrest,” he said.

Kamradt-Scott said that, even though the virus would inevitably spread, the quarantine appeared designed to buy authorities time to put in place other measures.