Justice after 32yrs as 5 ex-cops sent to gallows 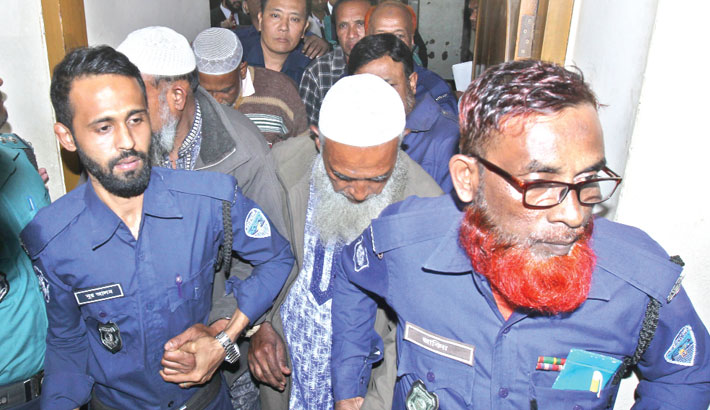 Laldighi Massacre Verdict : Five accused come out of a courtroom after a Chattogram court sentenced them to death on Monday in the Laldighi massacre case that left 24 people killed in police firing at a rally of Awami League Chief Sheikh Hasina in Chittagong three decades ago. — SUN photo

CHATTOGRAM: Justice was delivered after 32 years on Monday when a court in this port city handed down the death penalty to five ex-cops for shooting dead 24 people on a motorcade of the then opposition Awami League (AL) led by its chief and incumbent Prime Minister Sheikh Hasina in 1988.

The long awaited verdict was delivered by Chattogram District and Session Judge and Chattogram Divisional Special Tribunal Acting Judge Md Ismail Hossain, who also penalised each of the convicts with Tk 50,000 under the sections 302/34 of the Penal Code.

In its observation, the court termed the barbaric attack as a ‘mass killing.’

Of them, PC Mandol is still on the run, while the rest four were present at the court room when the judge gave his verdict, he said.

On 24 January1988, at least 24 people were shot dead and several hundred more injured when police sprayed bullets on a motorcade led by the then AL President Sheikh Hasina near Court Building. on January 24 in 1988.

Lawyer Md Shahidul Huda filed the case on March 5 in 1992 after fall of the rule of autocratic government of late president Hussain Muhammad Ershad. But, the proceedings didn’t progress during the tenure of BNP government.

The plaintiff Shahidul and the last investigation officer ASP Abdul Kader died during the trial period.

Sources said the court started delivering the verdict amid tight security from around 3:00pm.

Quoting the witnesses, the court said Sheikh Hasina started from the Chattogram Airport to attend some street rallies on an open truck and her third gathering was at Laldighi Maidan near the Chattogram Court Building.

There were several barricades to bar the motorcade to enter the area. As they entered breaking one of the barricade, the then Patrol Inspector JC Mondol informed Police Commissioner Rakibul Huda about the incident.

The police commissioner ordered them by wireless to open fire to stop the procession, said the court.

After the verdict, Senior Lawyer Iftekhar Saimul Chowdhury told the reporters that the gathering was organised as part of movement for uprooting the then autocratic government.

The firing was opened targeting Sheikh Hasina on that day, but she survived luckily. Lawyers escorted her to the Court Building safely, he said.

Expressing satisfaction over the verdict, the lawyer said the verdict has set example through ensuring punishment for autocratic activities in the country after 32 years.

Narrating the horrifying experiences of the day, Faridul Alam, an injured eyewitness, told the daily sun at the court premises that as the procession proceeded towards the Court Building on that day, cops sprayed bullets indiscriminately from two sides of the march led by Sheikh Hasina.  “Many leaders and activists were killed or injured in the attack. Bodies were lying everywhere. I was also tortured inhumanly at that time,” said Faridul, who was an activist of Bangladesh Chhatra League (BCL), the Awami League’s student front.

“I gave deposition in the case before the court as second witness,” he added.

Another injured eye-witness, Abdul Mannan Kutubi said he sustained two bullets in his hand and leg in the shooting.

The bodies were taken away by trucks to the Abhoymitra Crematory and cremated irrespective of religious faiths without handing over to their families, he said.

The case was revived after the AL formed government in 1996. CID submitted first charge sheet on January 12 in 1997 and supplementary charge sheet after further investigation on November 3 in 1998.

Of the accused, Commissioner Rakibul, Constables Abdus Salam and Bashir died during the trial period.

A total of 56 persons gave depositions in the case so far. After placing argument for the absconding accused JC Mandol on Monday morning, the court pronounced the verdict in the afternoon.

Prime Minister Sheikh Hasina also wanted disposal of the case while inaugurating and laying foundation stones of 17 development projects in Chattogram through video conferencing from Gono Bhaban on November 1 in 2018.