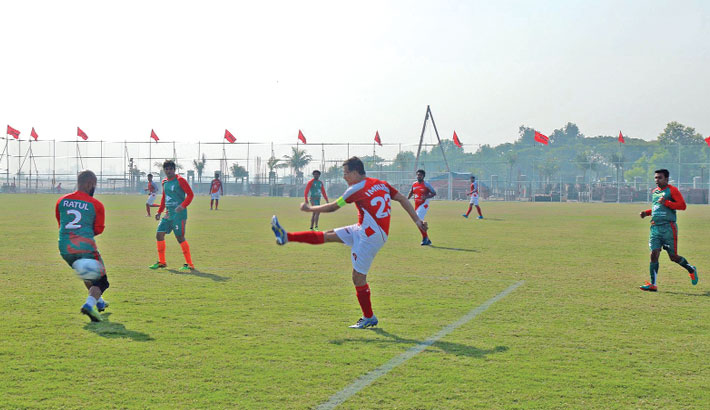 Javier, Sadman were adjudged players of the match for Bashundhara Kings Officials and BSPA XI respectively.

In a festive environment, the match was followed by a prize giving ceremony. There was also a raffle draw held after the lunch.

Bashundhara Kings President Imrul Hasan was characteristically jolly after the match and after the huge win renewed their commitment for bridge-building activities to bring football back to the fore of Bangladesh’s sports’ discourse.

“It was an amazing match. I really enjoyed it. Hope that such initiatives will continue in the future as well,” said Imrul Hassan.

“We are looking forward to the international tournaments. We have AFC Cup coming. Bashundhara Kings will represent Bangladesh in that tournament. Our aim is to increase hoist the flag of Bangladesh internationally. We will try to perform well and take the football of country to a better position.

The Champions of Bangladesh Premier League and Federation Cup Bashundhara Kings arranged the match and other fun-filled activities including raffle draw and prize giving ceremony.