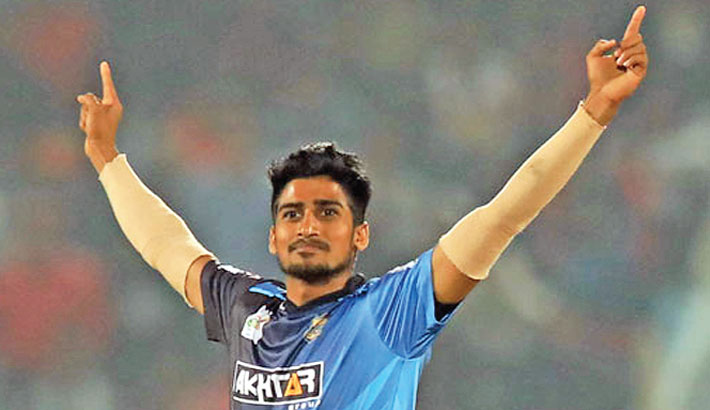 Throughout Bangabandhu Bangladesh Premier League (BBPL), Bangladesh Cricket Board (BCB) went through a sieving process to reinforce their T20 squad with players skilled in the shortest format of the game ahead of the seventh edition of ICC T20 World Cup 2020, which is all set to take being in Australia on October.

With a lesser number of overseas players’ taking part in BBPL compared to the previous editions, both local bowlers and batsmen had more opportunity to showcase their abilities in the shorter format of cricket, which eventually served the major purpose of the tournament quite aptly.

Chattogram Challengers left arm fast bowler Mehedi Hasan Rana was one of the talking points throughout the campaign picking 18 wickets in just 10 matches for Challengers.

The 23-year-old left arm bowler who was a compatriot of national team’s leading fast bowler Mustafizur Rahman during their under-19 days, made his presence acknowledged against Mustafizur’s Rangpur Rangers but Rana declared his coming of age sensationally when the bowler picked 4 wickets for just 23 runs in four overs in the very next match against Khulna Tigers.

Rana’s 18 wickets prove that, he was undeniably one of the major reasons behind Chattogram’s performance and helped them get to the Second Qualifiers, which was their second most successful season in the history of Bangladesh Premier League (BPL) as Chattogram never managed to reach the final after the second edition of BPL back in 2013.

But no matter how successful Rana was, Mustafizur Rahman did not fail to top the chart with 20 wickets from 12 matches despite his team’s dismal show in the tournament that saw them failing to qualify for the knock out stage.

Mustafizur kept a below 7.2 economy rate which hints that the country’s finest pacer was ready to be back in form when he dawns national colours after suffering a dismal phase post ICC World Cup 2019.

Apart from Mustafizur and Rana, national team’s express pacer Rubel Hossain was another name which came back to the scene as he claimed a spot at the top section of the bowlers’ chart with the same number of wickets (20).

As Chattogram Challengers managed to get through the group-stage, Rubel was able to play three more matches where he bowled at an economy rate of 7.31 runs.

Rangpur Rangers and national team pacer Taskin Ahmed took 11 wickets playing eight matches. Not as dominant as the fast bowlers, the young Bangladesh local batsmen also hogged the limelight towards them with their match winning performance.

Opener Liton Das was one of the heroes that Rajshahi were hugely dependent upon to reach this stage as the national team’s talented batsman scored 430 runs in 14 matches.

Undeniably, another national team prospect Afif Hossain was also instrumental for Royals, contributing 360 runs in 14 matches along with Liton as Rajshahi’s opening pair.

National team opener Tamim Iqbal’s performance also took the turn for the better as the left handed batsman seemed to be in form scoring 396 runs in 12 matches for Dhaka.

As Shakib Al Hasan’s availability during the ICC Twenty20 World Cup in October was still in doubt, the national team selectors will have a good number of options in hand if they had to form a team without the all-important Shakib.

Imrul Kayes (442), Mohammad Naim (359), Mohammad Mithun (349) and Shoumya Sarkar (331) managed to show their ability in the 20-over format of cricket. Kayes once again put on a performance worth of notice of national selectors ahead of another key event of the national team which will surely make the selectors consider his performance in the tournament as the batsman averaged 49.33 runs in 13 matches with a strike rate of 132.33.

Since being promoted up the Khulna batting order, Mehedi Hasan Miraz scored a lot of runs whose batting performance might have come as a pleasant surprise for the selectors.

Mehedi the national team’s spin bowling all-rounder scored 288 runs with 36 run on average in 13 matches with a strike rate of 132.11.

BCB Chief Selector Minhajul Abedin Nannu admitted that they have got some new players under their radar.

“Definitely there are some new players under our radar and we are delighted to have them. Some of the matches were very competitive and we are really happy to see the locals shine in the tournament,” Minhajul told daily sun on Friday.