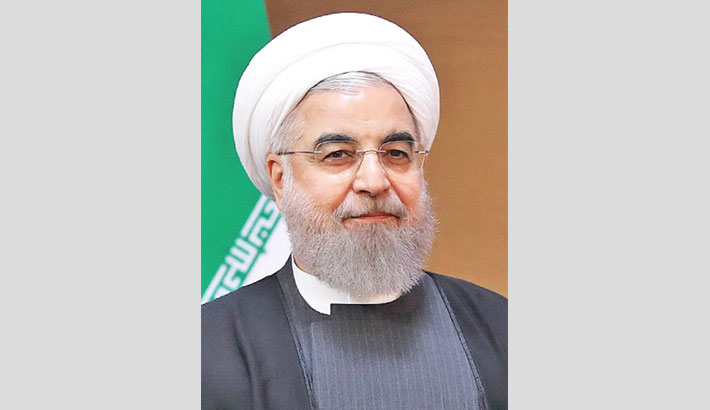 TEHRAN: President Hassan Rouhani appealed Wednesday for “unity” and flagged the need for radical changes to the way Iran is run, after a wave of angry protests over the accidental downing of a Ukrainian airliner, reports AFP.

The Kiev-bound Boeing 737 was shot down last week in a catastrophic error shortly after takeoff from Tehran, killing all 176 passengers and crew on board.

Iran had for days denied claims based on US intelligence that the plane had been downed by a missile, triggering four days of demonstrations as well as international calls for a full and transparent investigation.

One week on from the disaster, Rouhani called for “national unity” in an address broadcast live on state television.

“If there was a delay” by the armed forces to release information about the air disaster, “let them apologise,” he said.

Rouhani also called for a full explanation of what happened in the air disaster, which came hours after Iran’s military fired a wave of missiles at US troops stationed in Iraq. The missile attack was launched in retaliation for a US drone strike that killed Iran’s most prominent general, Qasem Soleimani, who headed the Revolutionary Guards’ foreign operations arm. Rouhani also said Iranians wanted “diversity” as he urged the electoral authorities to refrain from disqualifying would-be candidates for a February 21 general election.

That would mark a major shift in a country where all candidates are vetted by a constitutional watchdog, The Guardian Council, for their loyalty to the state. “The people are our masters and we are its servants. The servant must address the master with modesty, precision and honesty,” Rouhani said in his remarks after a cabinet meeting.

“The people want to make sure that the authorities treat them with sincerity, integrity and trust. “Allow all parties and groups to run for office,” he said. “Surely you have nothing to lose. “The country cannot be governed by one political wing alone. The country belongs to everyone.”Iran has been rocked by crisis after crisis since 2018. In May that year, US President Donald Trump unilaterally withdrew from a landmark 2015 agreement that gave Iran relief from sanctions in return for curbs on its nuclear programme.

Since then, the US has relentlessly slapped waves of sanctions on Iran as part of a stated campaign of “maximum pressure”. Washington says the campaign is aimed at reining in Tehran’s missile programme and “destabilising behaviour” in the region. Iran has hit back by progressively reducing its commitments to the nuclear deal.

On Tuesday, as tensions mounted with the West over the downed airliner, European parties to the deal launched an arbitration process charging Iran with failing to observe its commitments to the accord.

In response Iran warned Britain, France and Germany they must “be prepared to accept the consequences” of their move.

The past year has seen arch-enemies Iran and the United States come to the brink of war on at least two separate occasions.

On June 21, 2019, Trump approved a strike on Iran in retaliation for its downing of a US drone, before cancelling it at the last minute.

Most recently, Iran had been braced for US counterstrikes after it launched a volley of missiles at US troops in Iraq to avenge Soleimani’s killing. But Trump refrained after the missiles caused no casualties.

In his address on Wednesday, Rouhani blamed the United States and its allies for causing “insecurity” across the Middle East.

Their “mistakes”, he said, included the Soleimani killing, interventions in Iraq, Yemen and Libya, as well as the US decision to pull out of the nuclear deal and reimpose sanctions on Iranian oil.

“Security in this sensitive and important region will come at the expense of the entire world,” said Rouhani.

“Today the American soldier is not safe, tomorrow it could be the turn of the European soldier,” he added, warning the US and its allies to leave the region.

The downing of the Ukrainian airliner came after a spate of disasters for Iran.

On January 7, at least 59 mourners were trampled to death at a funeral procession for Soleimani in his hometown of Kerman, in the southeast of the Islamic republic.

The country has also been wracked by heavy flooding since Friday that has claimed the lives of at least three people and left hundreds of villages cut off.

Referring to the series of disasters which he described as “unimaginable” and “unacceptable”, Rouhani said they should lead to a “big decision” about Iran’s political system.

“And that major decision,” he said, “is national reconciliation.”

“These (parliamentary) elections must be the first step.”