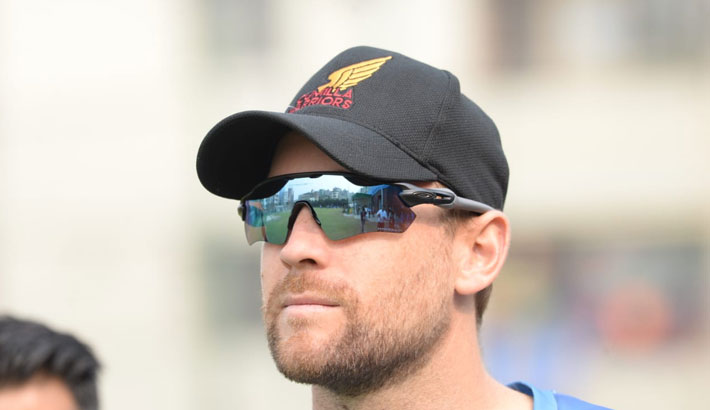 Cumilla Warriors batsman Dawid Malan said on Thursday that they looking forward to bring down pre-tournament favourites Dhaka Platoon when the meet them in their next game of Bangabandhu Bangladesh Premier League at Sher-e-Bangla National Cricket Stadium today.

Platoon are expected to give rest of the teams a run for their money in the tournament considering their bench strength as they have got three A+ cricketers in their line-up along with several seasoned foreign recruits.

Cumilla Warriors began their campaign on the right note as they defeated Rangpur Rangers by 105 runs and according to Malan they want to keep up the momentum.

Malan said that they have to come up with a unified effort if they want to beat Dhaka Platoons as he feels that their skipper Danus Shanaka won’t bail them like the way he did in their match against Rangpur Rangers with his blistering 31-ball 75.

“So we are up against Dhaka next. Going by the paper, they are a very good team and a very good bowling attack. So we have to improve the way we batted. Our captain played exceptionally well in the first game. He got us to 174 runs. Rest of us have to play little bit better against this Dhaka team. But it is a good sign that we didn’t play as well as we could have but still won the first game,” Malan told reporters at Sher-e-Bangla National Cricket Stadium on Thursday.

“It has been good fun so far as it is always. Especially when you and your team are doing well. Challenge is when it does not go too well. Hopefully as we can move on in the tournament, we as a team keep improving and keep winning as a team it will be more enjoyable,” he said.

Malan said that he is expecting the wicket to behave differently with every passing day as he got vast experience of playing in this part of the globe.

“The wicket has changed. I don’t know whether it’s because of the temperature or not. First couple of times I played here, it was really hot. The wicket was lot harder. So it didn’t grip as much and was not this much skiddy. As the tournament goes on, I think it always gets harder and last year it became little bit of skiddy and harder as well. That will be the challenge. It’s almost winter and the challenge is to get them hard,” said Malan.

“I wouldn’t say it’s tough to adapt. You come across coaches and so on who make your life easier. You know, in this team, I have played with half of them either in Dhaka Premier Division Cricket League or Bangladesh Premier League. So I know all of them. It’s not as hard as you think. It’s hard to gel as a team and work hard with people to make a good combination. It will be challenge for first three-four games in the tournament,” he said.