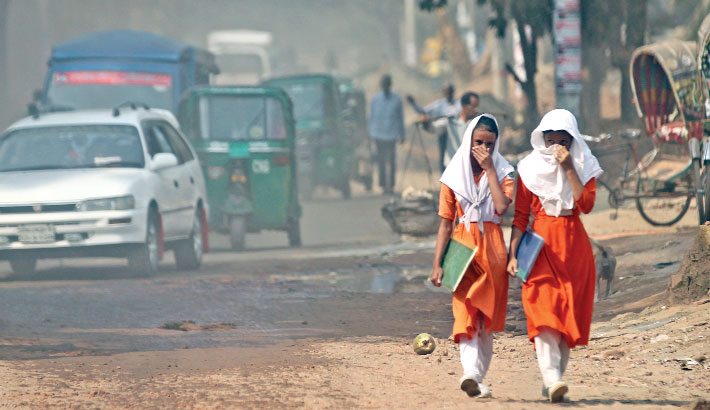 Huge dust produced from different development and repair works pollutes the air seriously in the port city. The photo was taken from Ambagan area on Tuesday. — sun photo

A large number of city residents have been experiencing untold sufferings due to higher amount of dust being produced from different development activities, vehicles, factories and repair works in the port city.

The amount of dust increased in this dry season posing a great risk to public health.

The development and construction works without sufficient protective measures are largely blamed for the situation while sweeping of roads in a traditional way and plying of outdated vehicles emitting black smoke alongside the industrial pollutant are also contributing to it.

Reluctance to take step for cutting expenditure by the industry owners and lack of awareness among the organisations are also blamed for the air pollution.

Among the organisations, Cwasa is cutting almost all the roads in different areas for setting water pipelines while CDA implementing mega projects to address waterlogging and construct elevated expressway and CCC carrying out renovation works of roads.

These nonstop diggings, repair works of the roads and traditional way of sweeping the roads are allowing flyable dusts to mix in the air every day.

While visiting different areas of the city, this correspondent found situation worst due to dust in some areas.

The dust covered roadside trees and other establishments in the areas.

Residents of the areas blamed the concerned authority for not taking necessary measures to protect flying of dust during their works.  The pedestrians and commuters mainly the school going children and elderly persons are worst victim of the situation, they said.

DoE Chattogram Divisional Laboratory in their regular test revealed that air of the port city contains pollutant higher than the acceptable level.

Air in different industrial areas of the city was found containing Suspended Particulate Matter (SPM) ranging from 400 microgram to 800 microgram as against permissible quantity of 200 microgram in each cubic meter, said sources.

On the other hand, air in different residential and commercial areas was found containing highest 309 microgram Particulate Matter (PM) in November this year against permissible quantity of 150 microgram.  Black smoke from vehicles, traditional brick kilns, dust from the construction sites and industries and burning of fuel wood are the main sources of the pollutant, they said.

Private service-holder Ehsanul Karim of Halishahar area said he goes to his office and take his children to the school through Port Connecting Road amid huge dust every day.

The children used to fall sick due to presence of huge dust on the road.

A number of pedestrians were seen using facemask during movement in the day hours in the area.

Physicians warned that longtime contact with dust can lead to different health hazard including respiratory and cardiovascular diseases among the city dwellers.

Even people can be affected with lung infection, influenza, typhoid, cough, eye infection and cancer, he said.

“Concerned authorities should take measures for reducing the air pollution considering the public safety,” he said.

City dwellers should wear mask and goggles to get rid of dust, he suggested.

Dust from industry and roads helps the SPM to gather in the air and play causative role later, he said.

Use of air filter, dust collectors and fume extraction system are imperative for controlling the pollution, said the director.

Contacted, CCC Chief Engineer Lieutenant Colonel Sohel Ahmed said they are aware of dust in the city and spray water two times in a day at construction sites.

“We also issued letters to Cwasa and BTCL to reduce emission of dust from their construction and repairing works,” he said.

All the concerned agencies will have to come forward and work together to reduce the air pollution in the city, he added.