Storytelling could reduce violence against women 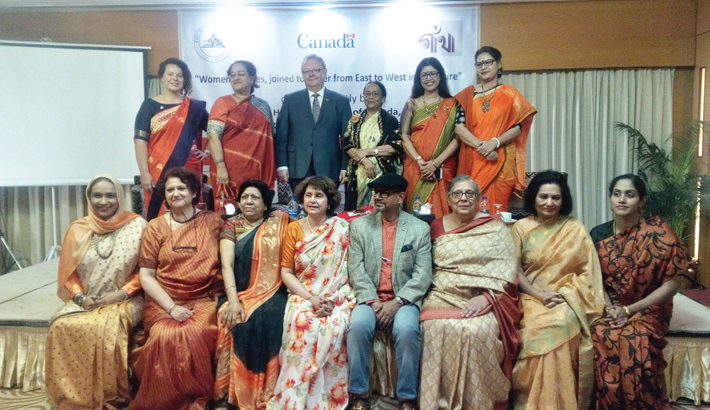 Guests of an event titled ‘Women's Voices, Joined Together from East to West in Literature’ pose for a photo at a city hotel on Saturday. High Commissioner of Canada to Bangladesh Benoit Préfontaine was also present. – SUN PHOTO

Speakers at a programme said storytelling can play an important role in raising awareness about taboos or uncomfortable topics such as rape and gender-based violence in society.

They came up with the views at a discussion titled ‘Women's Voices, Joined Together from East to West in Literature’ held at Six Season Hotel in the capital on Saturday as part of the global campaign ‘United Nation's 16 Days of Activism Campaign against Gender-Based Violence’.

The High Commission of Canada, Gantha (Writers Group) and the Reading Circle- a group of dedicated Bangladeshi women intellectuals organised the programme.

The participants said storytelling can even contribute to reducing violence against women and bringing a social change.

High Commissioner of Canada to Bangladesh Benoit Préfontaine was present in the event.

Besides, Bangladeshi authors -- Selina Hossain, Anwara Syed Haq, Jharna Rahman, Shahnaz Munni and Razia Sultana Khan -- read out their own writings which are written in the context of gender-based violence.

Programme Manager of High Commission of Canada Rosalee LaPlante read out a short story of Canadian writer Alice Ann Munro, which is also written on the same topic.

In his speech Canadian High Commissioner said one in three women and girls, experience violence in their lifetime.

Sexual gender-based violence happens disproportionately to women and girls in every country and every society: at home, in schools, on the streets, at work, on the internet and in refugee camps. But, it affects everyone; it negatively impacts families, communities and societies as a whole, including men and boys.

Too often, violence against women and girls is normalized and goes unpunished. Canada condemns in the strongest terms all forms of SGBV wherever it occurs. That is why we have developed a federal strategy to address gender-based violence in Canada.

Each year from November 25 to December 10, women around the world unite and raise their voices in support of the day.