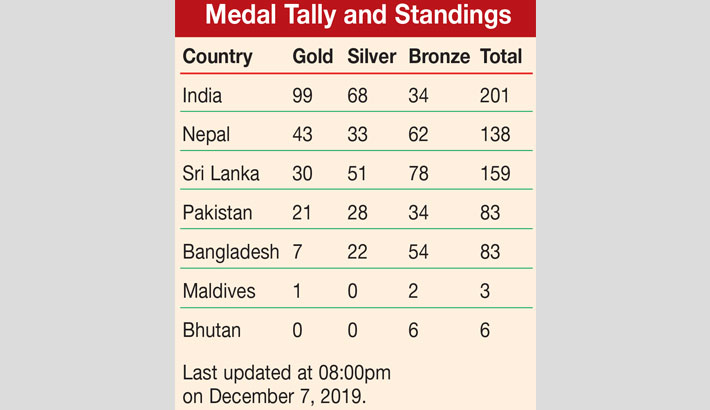 Meanwhile, Bangladesh continued to dominate in archery event with Ruman Sana at third spot of Recurve Men Individual (Final Round Ranking) with 686-1 points while Mohammad Tamimul Islam was at second with his 660-4 points.

While, Recurve Women Individual event, Ety Islam came third with 632-1 points while Mahanaz Akter with her 625-2 came in fourth.

Suma Biswas was at second spot with 682-2 points.

Susmita, Suma and Shamoli Ray also made sure that Bangladesh stay at the apex of Compound Women Team event.

While Basketball 3*3 event, Bangladesh succumbed to India with 11-21 points at Covered Hall in Tripureshwor. Bangladesh lost both their matches of Handball on the day. Men lost to Pakistan by 17-28 points at Pokhara Covered Hall while Women lost to India by 13-41 points

Earlier on Friday, Bangladesh had yet another mediocre day filled with silver medals at 13th South Asian Games at Kathmandu and Pokhara in Nepal.

Mohammad Farhad won silver in the men’s single event, where he scored 282 to come second. Nepal won both the gold and the bronze with a score of 274 and 284 respectively.

In the women’s single event, Zakia Sultana won the silver with a score of 317 whereas Sri Lanka won both the gold and the bronze.

It was the brave girls of Bengal who shone for Bangladesh by bagging silver medals on the day.

The other silver medal came from weightlifting event as Rokeya Sultana Sathi took to the second step of the podium in the under-71 kgs women’s event.

The women’s team event also brought silver as the Bangladesh team of Zakia Sultana, Nasima Akter and Sonia Akter ended up on a score of 639. Sri Lanka won the gold in this discipline whereas Nepal won the bronze.

Bangladesh finished 4th in the 12th SA Games 2016 at Guwahati and Shilling of  India clinching a total of 75 medals, including four gold, 15 silver and 56 bronze.