Efforts on to ensure facilities of modern city: Mayor Nasir 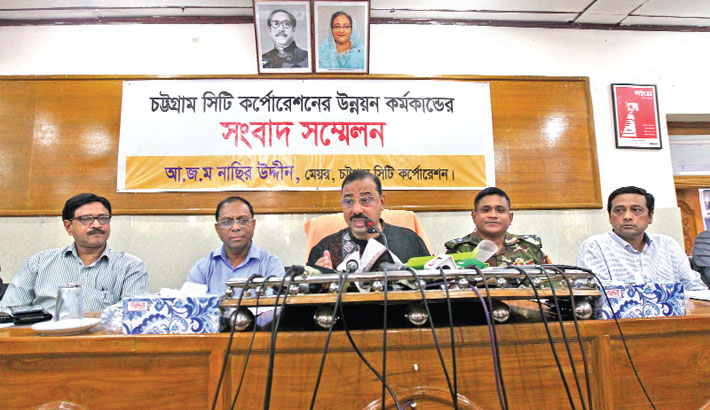 Chattogram City Corporation (CCC) Mayor AJM Nasir Uddin speaks at a press conference on development activities of the CCC at its auditorium on Tuesday. — sun photo

Chattogram City Corporation (CCC) Mayor AJM Nasir Uddin said efforts are on to ensure the facilities of a modern city keeping the electoral pledges in mind.

The mayor said this while addressing at a press conference convened to put up development activities of the CCC at CCC auditorium on Tuesday.

Mayor Nasir in his speech said that some 825 dustbins out of total 1,375 have been removed and garbage is being removed with the increased manpower of conservancy department in day hours to lessen the public sufferings.

Works for digging the much-awaited canal from the Bahoddarhat to Karnaphuli are going on at a cost of Tk 1,256 crore to reduce the waterlogging in the city, he said.  Some 100 air-conditioned buses will be launched in cooperation of the Chattogram-based ‘S Alam Group’ in three routes in January to address the acute transport crisis, said the mayor.

“The city dwellers have now been experiencing result of unplanned urbanisation. Different initiatives have been taken to address the crises,” he said.

A project for turning the airport road to four-lane has been taken while drains are being developed on the both sides of the road in Cement Crossing area, said Nasir, also general secretary of Chattogram City Awami League. Renovation works of the Port Connecting Road and Agrabad Access Road are going on in full-swing while works of the Arakan Road are expected to be completed by this month, said the mayor.  “As the dry season is the best time for carrying out works smoothly, we are trying to utilise the period,” he said.

Putting up the statistics of different development works including the carpeted road, he said the works of bringing the entire city under lighting system advanced much.

He also called upon the journalists to play due role though putting up the issues good for the city, irregularities and corruption for betterment of the city further. CCC Chief Executive Officer Md Shams-Ud-Doha, Chief Engineer Lieutenant Colonel Sohel Ahmed, Chief Town Planner AKM Rezaul Karim and Chief Education Officer Suman Barua were present at the press conference among others.