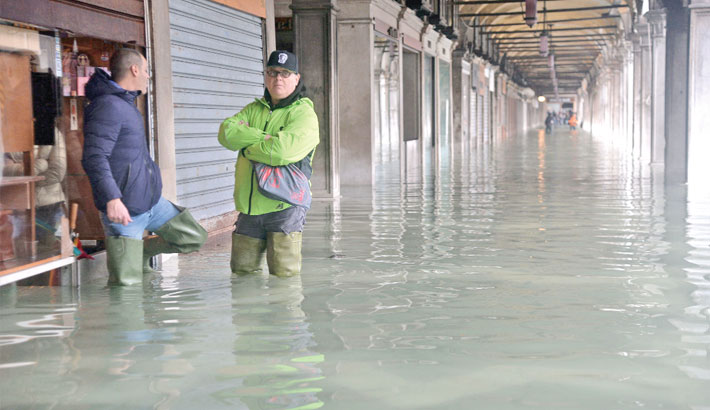 Persons stand in flooded Venice in Italy, in the morning of Sunday prior an “acqua alta”, or high water, of 160 centimetres (over five feet) expected at midday. —AFP PHOTO

VENICE: Venice’s St Mark’s Square was closed on Sunday as the historic city suffered its third major flooding in less than a week, while rain lashing the rest of Italy prompted warnings in Florence and Pisa, reports AFP.

“The water has stopped rising,” tweeted mayor Luigi Brugnaro, who has estimated damage so far from the invading salt water at over one billion euros (dollars).

“High of 150 centimetres... Venice is working to restart,” Brugnaro said after the sea water swamped the already devastated city where authorities have declared a state of emergency.

To the south, Tuscany president Enrico Rossi tweeted a warning of a “flood wave” on the Arno and said boards were being installed on the swollen river’s banks in Pisa “as a precautionary measure”.

The Italian army tweeted photos of paratroopers helping to bolster river defences in Pisa, with authorities monitoring the same river in Florence after heavy rain made it rise dramatically overnight.

Arno flooding devastated Renaissance jewel Florence in 1966, killing around 100 people and destroying thousands of priceless works of art. Civil protection units in Florence advised citizens “not to stand near the Arno’s riverbanks”.

The renewed threat from exceptionally high tides in Venice came after a brief respite on Saturday.

Emergency workers removed temporary walkways from St Mark’s Square as the water started to rise on Sunday, with only police and soldiers visible at around midday.

The top tourist site had already been shut for several hours on Friday as strong storms and winds battered the region, leaving it submerged by sea surges.

Churches, shops and homes have also been inundated in the Renaissance city, a UNESCO World Heritage site.