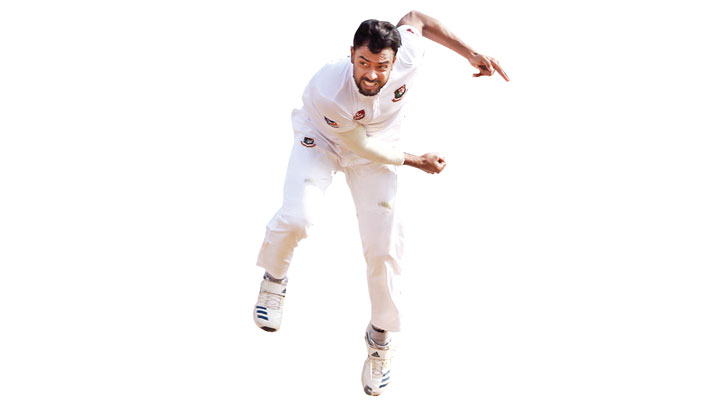 Bangladesh pace bowler Abu Jayed Rahi was the only shining spot for Bangladesh in their opening Test of the series against India at Indore as the show ended as if it was a one sided affair.

Jayed showed his talent with his four-wicket haul against India but it went in vain as he didn’t have a bowling partner to back him up from the other side as hosts’ experienced batting unit got the best of their opposition.

It could have been even better if Imrul Kayes did not drop the catch of Mayank Agarwal at slip when he was on 32 runs as that could have helped the visitors in more than one way as Agarwal dominated the proceedings with brilliant batting display thereafter.

Though India showed their class on the back of a combined batting effort, no one can take away the effort Abu Jayed put in at Indore as Jayed’s lion-hearted bowling performance didn’t go unrewarded as he kept running in and hitting the deck hard.

In the country’s cricketing environment where pace bowler are considered to be more like a step-son other than anything else whether Jayed will reach his potential is a matter of prediction considering it was not the case in the immediate past.

However, Bangladesh’s head coach Russell Domingo insisted that he is ready to change the mindset prevalent in Bangladesh’s cricketing fraternity.

“We think he (Jayed) is a really good Test bowler. He bowls in consistent line and length. He bowled really well in this game. I have read a few articles where it was written that he hasn’t picked up wickets in the domestic circuit, but we think he is one of our leading Test bowlers, and he will have a big role. He is definitely a guy we need to back,” Domingo told reporters when he was asked whether they need to back a bowler of Jayed’s caliber.

Questions were raised as Jayed faced many obstacles during his short stint at international level with the major one coming from none other than the team management as they failed to keep faith on him on regular basis unlike the way they do when it comes to batsmen and spinners.

The arrival of Jayed looked to have brought a breath of fresh air in the bowling armory of Bangladesh as he was the only one who had the ability to swing the ball both ways.

Unlike some of his other team mates who came into the national set-up at a very young age on the back of their performance in the age-level tournaments followed by representation in Bangladesh Cricket Board (BCB) XI fixtures, Jayed was certainly a different case altogether as he was drafted into the national set-up after playing first-class cricket for eight years, making his domestic first-class debut in 2010 while earning the Test cap in 2018.

Jayed was not someone trying to bang the ball over the head of the batsman rather he put more emphasis on swinging the ball and take advantage with whatever purchase he can get from the wicket.

The four wickets that he picked speaks a lot about the fact that if once has the control and belief in one’s skill he can dismiss even the best in the business-  Rohit Sharma, Chetashwar Pujara and Virat Kohli with the latter being dismissed after the insistence of the bowler to go for DRS when wicket-keeper Liton Kumar was having doubts regarding taking the review.

The journey of players like Jayed is not an easy one in a country like Bangladesh considering the trend followed by the team management when it comes to backing a pace bowler.

In the opening day of the Test match, skipper Mominul Haque admitted that they prefer to take an extra batsman than a pace bowler even in a track that had considerable amount of assistance for the pacers it only reflects the mindset of the team management regarding the fast bowlers of the country.

“Usually we prefer to have an extra batsman than a pace bowler. We don’t have too many pace bowlers with the ability to play longer-version cricket,” Mominul said after the opening day when he was asked why he did not pick a third seamer in the team

It seems that Mominul is following the footsteps of Shakib Al Hasan, whom Mominul replaced as Test skipper after Shakib was banned by International Cricket Council, as Shakib spoke in the same tone during the lone Test match against Afghanistan where the hosts opted to play without any pace bowlers.

Bangladesh are more reliant on spinners than pacers at own den and his explanation in the Test series was clear that they don’t have much plans when it comes for pacers.

“The pace bowlers need to deserve the place isn’t it? I was going through the stats and I was seeing that the economy of our pace bowlers was around 4.41. If that is the case than on one day they will give 400 runs and we will be out of the Test match on the first day. If their economy rate is around 2.8 or 2.9 and they have a good strike rate only then we can take them (pace bowlers). If the bowler does not meet our requirement than what is the point of having them in the team,” said Shakib when he was asked why he didn’t pick up any pace bowler against Afghans while it gave a clear message about their stand on the patronising pace bowlers.

Jayed, who had played only one Test so far at home out of the five Test matches Bangladesh played at their own back yard since his debut gives clear indication that he is still hoping to cement his spot despite the fact that all odds are against him as he needs to break the mindset if not anything else.

Jayed is also well aware that despite the performance against India, it does not guarantee him a place in the playing eleven in the upcoming Test matches, especially at home.

Jayed can take inspiration from the words of Domingo. Though in the past similar statements were made by head coaches who eventually had to give in to the traditional mindset despite making several attempts to change the cricket culture.

“To win Tests, you need a bowling unit. For Bangladesh to do well in Tests away from home, you need up to six bowlers. India, Australia, England and South Africa have done well because they can pick a group of five or six fast bowlers under any conditions, home and away,” said Domingo.

“Bangladesh’s strength has been spin bowling at home but pace bowling is something that we need to develop. We need to provide opportunities for fast bowlers with pitches where they can become a factor in the game, and bowl 18-20 overs a day. I think the wickets in Bangladesh at the moment don’t allow them to do this. They bowl six or seven overs in a four-day game,” he said summing up reason behind the sorry state of Jayed and co.