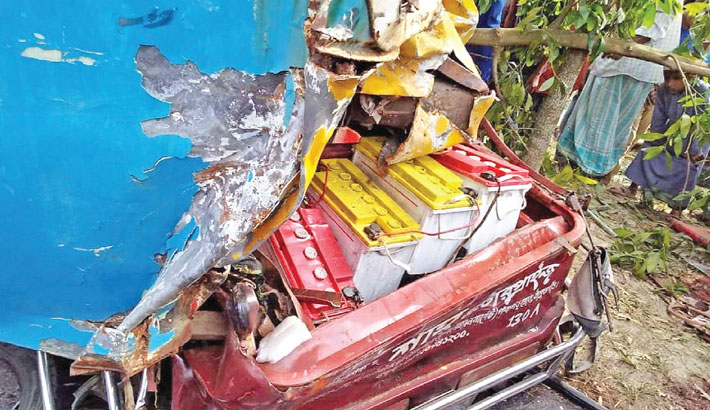 A battery-run easy-bike lies mangled after a head-on collision with a bus on Panchagarh-Banglabandha highway in Tentulia upazila of Panchagarh on Friday. The accident left seven people dead. —sun Photo

Seven people were killed in a head-on collision between a bus and a battery-run easy-bike on Panchagarh-Banglabandha highway in Tentulia upazila of Panchagarh on Friday.

Witnesses said the accident took place around 1:30pm as the Tentulia-bound bus of Kazi Paribahan hit the easy-bike, killing four people on the spot and injuring four others.

Later, three injured people succumbed to their injuries at the District Sadar Hospital. The deceased include easy-bike driver and six passengers of the vehicle. The identities of the victims could not be known immediately.

The driver of the bus fled the scene after the accident.

Three of the dead passengers were women, police said.

Local people and fire service members joined the rescue work and sent the injured people to Panchagarh Sadar Hospital. An injured person was being treated at the hospital.

Police Superintendent of Panchagarh Yusuf Ali and Officer-in-Charge of Sadar Police Station Abu Akkas reached the scene after the accident.

Meanwhile, Three people, including two cops, were injured in a road accident near Chandrima Udyan at Sher-e-Banglanagar in the city on Friday, reports UNB.

Jane Alam Munshi, officer-in-charge of Sher-e-Banglanagar Police Station, said the police vehicle ploughed through a footpath while giving side to a motorbike coming from the opposite direction around 10 am, leaving three people injured.

They were taken to the Rajarbagh Central Police Hospital.

Injured inspector Masud Pervez, said, “The vehicle carrying them hit a lamp post as a motorbike appeared in front of their vehicle while taking ‘U’ turn.”