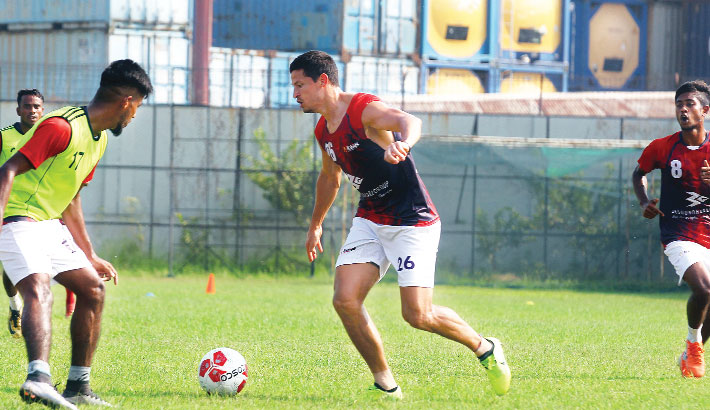 In the day’s other match, Chennai City FC of India are to play against Terengganu FC of Malaysia at the same venue at 4 pm.

Ahead of their first match, Bashundhara booters underwent a practice session at Bandar Stadium (Field no-1) on Monday.

Bashundhara Head Coach Oscar Bruzon held their opposition, Gokulam, in high regards and felt that Kings will need to be on their toes to bring home full points from the match.  Nonetheless, Oscar is satisfied with the squad for the new season and looked set to sweep all the trophies which come their way.

“They are the recent champion of Guran Cup beating teams like Mohun Bagan and East Bengal in the semi-final and final. I think they have a very particular way to play football.  Their wingers are very tough and we need to be aware and get a hold of their particular way of playing football and formation. We are ready and we have really studied well, we know their attacking options and we are here to control the game by playing in the opponent’s half and stay strong in the pitch. So I hope we can do that but Gokulam will be a tough rival,” said Oscar Bruzon during their practice session on Monday.

“But every day I am pleasantly surprised with the improvements we are making. We surely have taken a step forward if we compare our team to that of last year. Last year, Kings were good but this year we are even better and we will try to clinch every trophy,” told Oscar.

Kings had a heavyweight squad in the previous season but Oscar felt that this year’s squad is whole lot better as earlier they had really good quality footballers but while forming the playing eleven it became tough job to priorities one over another as the difference in skill between them were minimal. But this time around things will be different as Oscar feels Bashundhara Kings will have a strong playing eleven as they have roped in some phenomenal booters.

“Last year we were having some problems with balancing the squad. I am impressed with the quality of group. Our idea is to give chance to everybody,” told Oscar.

Meanwhile, Bashundhara Kings new recruit Robiul Hasan hopes to start contributing for Kings as soon as possible and pay back the trust of the team management for bringing him in.

“I came here for the professional mind-set of Bashundhara Kings. As there are a lot of national team players, it will benefit me and the team also to gel together. If we play in the same team then our level of understanding will increase. So I think Bashundhara Kings will reign in every upcoming tournament,” said Robiul adding thatv

“This is a challenge for me. If I want to improve then I have to take challenges. I want to become a top player by taking the challenges and that’s why I came to Bashundhara Kings. I think we will achieve a lot this season,” concluded Robiul.

They are the third Indian team after Mohun Bagan AC and Chennai City FC to play in the ongoing tournament replacing BPL runners-up Dhaka Abahani Limited, who withdrew from the meet in the dying moment.

A total of eight teams — split into two groups — are participating in the prestigious international club cup competition.