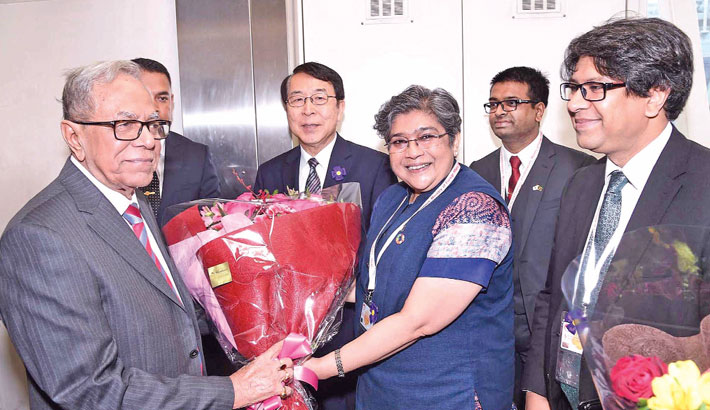 During his stay, he will attend the enthronement ceremony of the new Japanese emperor on Tuesday, his Press Secretary Md Joynal Abedin told UNB.

A regular flight of Singapore Airlines carrying the President and his entourage took off from Hazrat Shahjalal International Airport for Singapore at 1:35pm on Sunday and landed on Monday at 6:30am (Local time).

On the other hand, Liberation War Affairs Minister AKM Mozammel Haque, Road Transport and Bridges Minister Obaidul Quader, the dean of the diplomatic corps, Japanese envoy to Bangladesh Naoki Ito, the Cabinet secretary, chiefs of the three services, the home secretary (public protection) and police chief saw the President off at the airport in Dhaka.

First Lady Rashida Khanam, and officials concerned of the Bangabhaban are accompanying him during the trip.

President Hamid will attend the enthronement ceremony of new Japanese Emperor Naruhito and Empress Masako at the State Hall of Imperial Palace at 1:30pm (local time) on Tuesday (October 22).