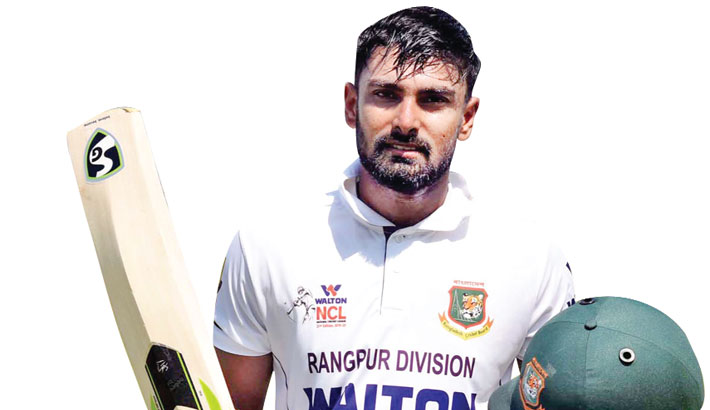 With a 122-run knock in the second round of National Cricket League (NCL), Bangladesh top order batsman Liton appears to have returned to run scoring ways after suffering months of run-drought.

Ahead of Bangladesh’s tour to India for 3 T20s and 2 Tests, Liton scored big against Dhaka Division which hints that the batsman is ready to get back to form leaving the bad times behind as Bangladesh approach the series against India.

In his opening match in the ongoing NCL after returning from CPL opener Liton’s 122 runs off 189 balls was decorated with 14 boundaries which helped Rangpur Divison to fight it out against Dhaka Division, who scored 556 runs in their first innings.

The last match he played in the last edition of the domestic longer version tournament, Liton scored a record of scoring a double hundred off just 140 balls.

Boasting impressive statistics in domestic circuit, the batsman was missed in the first round of NCL as the potential Bangladesh top-order batsman was busy with his CPL duties with Jamiaca Tallawahs.

The batsman was unable to justify his batting caliber in CPL as he failed to play big innings in the 20-over Caribbean tournament. The 25-year-old batsman could play only two matches where he scored identical 21 runs in the 38th and 39th rounds of CPL as Tallawah suffered first stage elimination.

“It (my stint in CPL) was certainly a good experience. I have not played in franchise-based cricket outside Bangladesh so it was kind of a learning experience for me that I believe will help me in the upcoming days,” said Liton adding that though he could not make it big he never looked to be out of sorts in the CPL.

“At the same time it had given me some sort of confidence because though I could not score big but I never felt any kind of unease during my stay at the wicket,” he said.

It was almost a similar case in the previous T20 Tri-nation series he played for the national team before joining the Tallawahs. The right-handed batsman had just one innings of 38 runs against Zimbabwe that worth mentioning in the Tri-nation series after scoring 19 runs in the first match and 0 during the defeat against Afghanistan.

The batsman could not change his fate as he scored 4 runs in the last match of group stage in the Tri-nation series against Afghans but that time Bangladesh skipper Shakib Al Hasan came out as the savior with his unbeaten 70 runs.

Liton also failed to give his team a good start in the absence of the team’s experience opener Tamim Iqbal during the one-off Test series against Afghanistan.

The batsman scored 33 runs in the first innings and 9 runs in the second as the team suffered 224-run defeat to Afghanistan in the one-off Test in Chattogram.

For East Zone in another domestic tournament, Bangladesh Cricket League (BCL), Liton boasts even better average than in NCL. The batsman has scored 1661 runs in 16 matches averaging 69.20 runs with 6 centuries and 7 fifties. “I cannot tell you the reason behind it (scoring runs in longer version),” concluded Liton. Bangladesh Cricket Board (BCB) announced their squad for India series on October 17 as the Shakib led squad to start their training camp from October 25 while the team management would be eagerly looking forward to see this potential batsman take this confidence in the upcoming days against their Asian neighbors in the tour consisting two Tests along with three Twenty20 internationals.