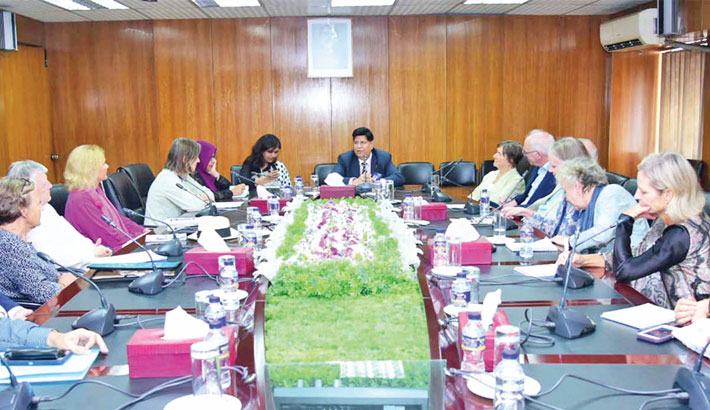 A delegation of UK’s all-party parliamentary committee meets Foreign Minister AK Abdul Momen at the Secretariat in the capital on Monday. - SUN PHOTO

Foreign Minister Dr. A. K. Abdul Momen has sought UK government’s continuous support to Bangladesh in the international forum especially in United Nations for exerting pressure on Myanmar in order to ensure sustainable return of Rohingyas.

The minister made the call while fourteen British Parliamentarians led by Ann Mette Kjaerby called on him at his office on Monday.

The Parliamentarians are visiting Bangladesh on a study tour on sexual and reproductive health, said a ministry press release.

Narrating the Rohingya situation and its multifold effects on Bangladesh, Dr AK Momen sought support for ensuring safe and sustainable return of the Rohingyas to their homeland in Northern Rakhine State.

He outlined the financial and environmental impact Bangladesh is currently undergoing for housing the Rohingyas.

The cooperation between Bangladesh and the UK in the field of implementation of Sustainable Development Goals (SDG) and Delta Plan-2100 will be continued, hoped foreign minister.

He also apprised the delegation of Bangladesh development in various socio economic sectors specially in reducing child and maternal mortality as well as population growth rates.

Momen also mentioned role of Bangladeshi British diaspora in the development of both Bangladesh and their host countries.

The members of the All Party Parliamentary Group on Population, Development and Reproductive Health thanked the Foreign Minister for the meeting.

They commended Bangladesh’s role in hosting 1.1 million Rohingyas with shelter and all kinds of humanitarian assistance.

They also assured the minister that the UK will continue to work with the Government of Bangladesh for its overall development from grassroots to national level and ensuring safe return of the Rohingyas to Myanmar.