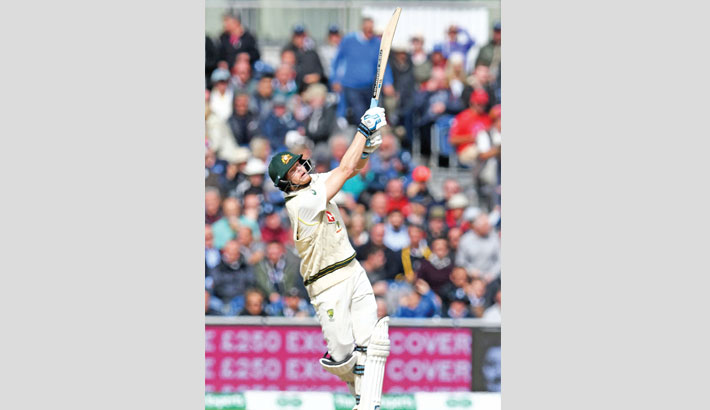 Steve Smith said he is satisfied with his double hundred that set England face an uphill battle to keep their Ashes hopes alive after a scolding from Joe Root was followed by the agony of watching Smith pile on a masterful double-century in Manchester, reports theGuardian.

Smith continued his indomitable run of form with 211 from 319 balls as Australia declared on 497 for eight. The right-hander had made the hosts pay for errors along the way too, surviving a drop by Jofra Archer on 65 and Jack Leach claiming his wicket on 118 only for replays to show a front‑foot no-ball.

With Joe Denly falling late in the day to Pat Cummins via a fine catch by Matt Wade at short-leg, Rory Burns and Craig Overton, in as nightwatchman, will resume in the morning with England 23 for one. They need 275 more runs just to avoid the follow-on and know Australia will retain the Ashes if they lose here.

Smith, who has 589 runs this series despite sitting out three innings with concussion, said: “It’s satisfying to get a big score. I was disappointed to miss Headingley but I wasn’t quite right and the right call was made. It gave me time to recover and I felt good. I was confident and have got us into a nice position.”

On returning to the middle after the blow sustained from an Archer short ball at Lord’s, Smith said: “I faced a lot of short-pitched bowling and haven’t had too many issues. The opposition bowling there means they can’t hit my pad or nick me off. It softens up the ball too and that plays into my hands.”

When Smith brought up his third Ashes double-century after tea, tucking the 310th delivery he had faced round the corner off Stuart Broad for a couple of runs, England’s weary cricketers could only applaud the batting on show and think back to missed opportunities.

Archer, who ended up with his career-worst first-class figures of none for 97 from 27 overs, had seen a tough return catch off Smith fly past his fingertips in the morning.

Smith said: “I had some luck, yeah. You always need some when you score big runs. It fell my way today. I was in a hurry for 20 minutes [after lunch] and after being caught off the no-ball I switched myself back on. When I saw the foot over the line I thought ‘how good is this? I get to carry on batting.