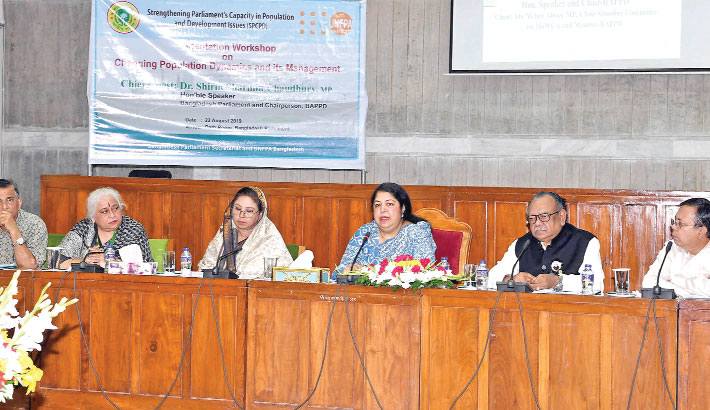 Speaker Dr Shirin Sharmin Chaudhury speaks at a workshop on ‘Changing Population Dynamics and its Management’ under the SPCPD project at the Jatiya Sangsad on Thursday. — sun photo

Speaker Shirin Sharmin Chaudhury on Thursday urged lawmakers to take a work plan for utilizing the working capacity of youths.

She came up with the call while addressing a workshop on ‘changes in population trend and its management’ as the chief guest at Parliament Secretariat.

The workshop was arranged under the Strengthening Parliament’s Capacity in Integrating Population Issues in Development (SPCPD) project jointly implemented by Bangladesh Parliament Secretariat and UNFP.

The half of the country’s population is women and therefore equal importance has to be given to women and children, Chaudhury said.

She said now it is an urgent need to make the youths educated with technical education apart from general education aiming to involve them in the mainstream of the society.

The Speaker said awareness progarmmes should be taken in the areas which are child-marriage prone.

She also called upon the lawmakers to take necessary measures in their respective constituencies for prevention of child marriage and development of youths and maternal health.

At the onset of the workshop, participants kept silence for one minute on the occasion of the National Mourning Day, paying homage to Father of the Nation Bangabandhu Sheikh Mujibur Rahman and his other family members who were killed in the 15 August carnage in 1975.