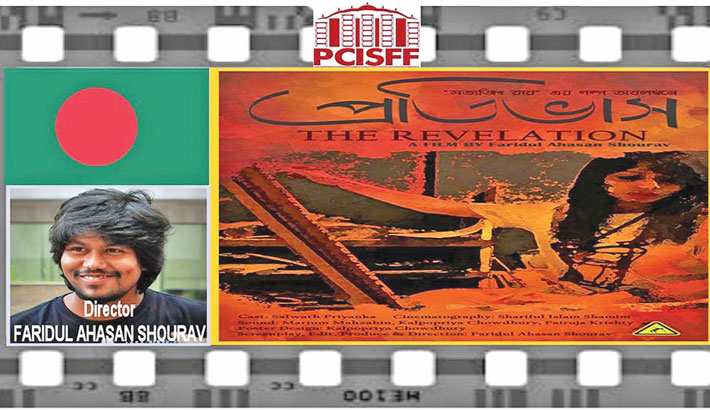 The Revelation, a Bangladeshi short film, has been selected in Foreign Films category of the Pink City International Short Film Festival which will begin from 1st September in Jaipur, India and end on 15th September.

The Revelation is a 10 minute short narrative fiction in which a talented young artist who detests nonfigurative art desperately tries to submit her meticulously painted masterpiece before the submission deadline for a central art exhibition.

Talking about the film director Faridul Ahasan Shourav said, “This short narrative fiction has been derived from one of the short stories of Satyajit Ray; the famous ground-breaking writer, artist and film director, and the screenplay was written by Shourav”. Shooting of ‘The Revelation’ took place in different locations across the capital such as Bangladesh Shilpakala Academy, an art studio of Uttara and also in Moderna Museet Mane Museum of Stockholm, Sweden. The story speaks of a dreamer and talented young artist who walk in the way of her cherished dream. The story changes its course because of her fickleness and apathy.”

The role of the protagonist was acted by Safwat Tasnia Priyanka. The cinematography was carried out by Shariful Islam Shamim. Foley sounds and music direction were recorded by Kalpopriya Chowdhury, Marium Mahzabin and Fairuja Krishty. Production of the film, art direction, colour correction and editing were done by the director Shourav himself.