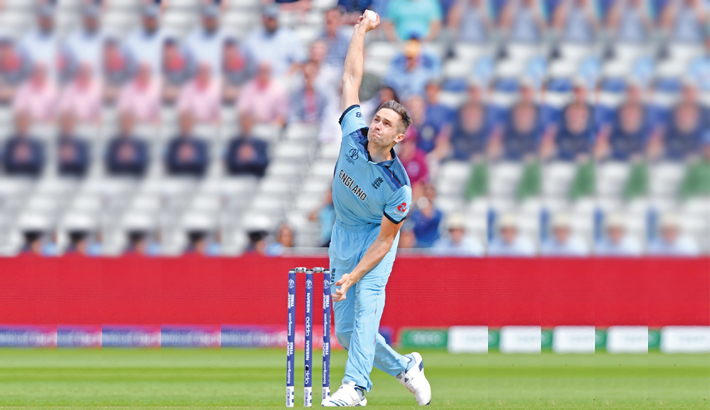 Jason Roy’s swashbuckling innings led England to their first World Cup final since 1992 as the hosts crushed Australia by eight wickets at Edgbaston on Thursday.

The 28-year-old’s sensational WC campaign continued as he struck 85 off just 65 balls during a masterful knock, sharing a fourth first-wicket partnership of over a hundred in the tournament with Jonny Bairstow (34).

Roy was left frustrated when he was adjudged to have edged Pat Cummins behind, with replays showing no bat or glove involved, but with England’s review having been used up by Bairstow, he was forced to walk off.

Despite losing both openers, Joe Root (49) and captain Eoin Morgan (45) ensured there would be no shock collapse, easing the hosts home in 32.1 overs.

Bairstow fell lbw to Starc, who in the process set a new record for most wickets (27) at a single World Cup.

“I’m pretty speechless,” said man-of-the-match Chris Woakes. “It was an incredible performance from the whole team. It started with the bowling performance and then the way they knocked that off was outstanding.

“There were some nerves around this morning but that’s natural going into a semi-final. The way we produced the goods just showed how good we are and where we are at as a team.”

Earlier, Australia were reduced to 14-3 as a blistering opening bowling spell from Jofra Archer (2-32) and Chris Woakes (3-20) caught the five-time champions cold, before they limped to 223 all out in 49 overs.

Steve Smith made a battling 85 off 119 balls with Alex Carey (46) - who suffered a nasty blow on the chin from Archer - Glenn Maxwell (22) and Mitchell Starc’s (29) contributions dragging Australia past 200, but that was not enough to prevent a first defeat in a World Cup semi-final.

England will face New Zealand in the showpiece match at Lord’s on Sunday after Kane Williamson’s men defeated India by 18 runs in the first semi-final at Old Trafford.

Pressure more than scoreboard gravity could have been England’s biggest demon in their chase of a relatively low total but Roy made his intent clear early on, drilling Starc through the covers for a pair of boundaries in the fifth over.

The opener launched Nathan Lyon’s first ball back down the ground for his first six of the innings before slapping the spinner through backward point for another boundary, showcasing the full range of shots in his arsenal.

Roy dominated his opening stand with Bairstow and smoked Smith for three consecutive maximums, the third a 101-meter blow over the part-time spinner’s head.

Root struck three of his first four balls away to the boundary but Roy fell in conspicuous circumstance, with Cummins’ loud appeal for caught behind convincing Kumar Dharmasena of an edge.

The loss of England’s opener did little to stop their charge towards to the final, as Root (49no) and captain Morgan (45no) clinched victory with a mammoth 107 balls spare.

England enjoyed a sensational start to proceedings at a rocking Edgbaston as they reduced Australia to 14-3 in 6.1 overs.

Archer’s in-swinging first delivery pinned Aaron Finch flush on the front pad - as the visitors’ captain became the first Australian to be dismissed for a golden duck in a World Cup match. The biggest concern during England’s batting innings was a potential groin strain that seem to hinder Bairstow and he was trapped plumb in front by Starc for 34 - ultimately wasting England’s review.

A cacophony of boos welcomed Smith to the crease but the boisterous crowd were soon cheering again as home favourite Woakes followed up being smoked back over his head for a one-bounce four by David Warner (9) by squaring up the opener, the ball taking the shoulder of the bat and into Bairstow’s hands at first slip.

Peter Handscomb’s (4) World Cup debut lasted just 12 balls as Woakes got the ball to shape back in and clatter into the batsman’s middle stump - the No 4’s lack of foot movement costing him.

The five-time world champions were unable to cope with the searing spell of swing and seam bowling Archer and Woakes were producing, pitching the perfect lines and lengths in a hostile opening half-an-hour of play.

A short ball from Archer struck new man Carey on the helmet and the Australian wicketkeeper had the presence of mind to catch his lid as it flew towards the stumps with the fiery delivery drawing blood from his chin.

Carey continued and shared a 103-run fourth-wicket partnership off 127 balls with Smith but the former was caught at midwicket off Adil Rashid for 46 and a googly from the leg-spinner then accounted for Marcus Stoinis (0) four balls later.

Although Smith had looked nervy at the starts of his innings, making just seven off his first 34 balls, the No.3 brought up a 72-ball fifty - met by more boos than cheers from the partisan crowd.

Having slipped to 166-7, a 51-run eighth wicket partnership between Smith and Starc took the visitors past 200 but England took two wickets in two balls - a brilliant direct hit from wicketkeeper Jos Buttler at the non-striker’s end running out Smith for a tournament-best 85 before Mitchell Starc (29) nicked Woakes’ next delivery behind.

Mark Wood polished off the innings in style as he castled Jason Behrendorff for one to bowl Australia out for 223 in 49 overs - a total that proved far too little against England’s in-form openers.