Parki beach can be an attractive tourist spot 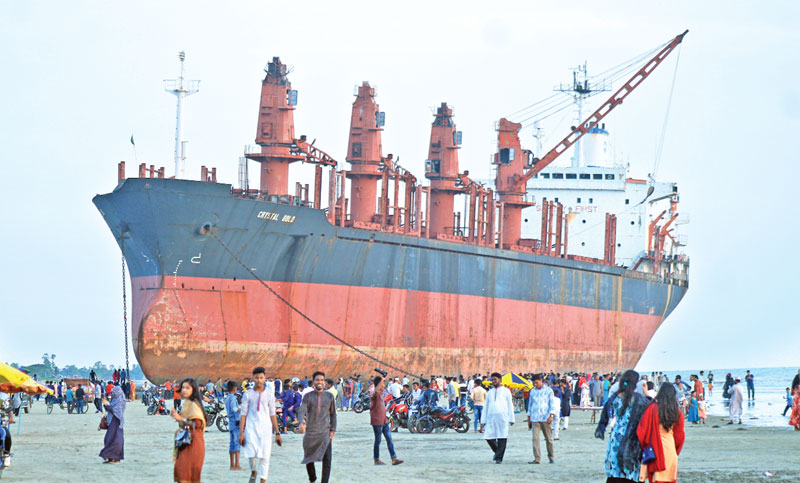 A large number of tourists throng Parki beach in Chattogram. A ship got stuck on the beach during the cyclonic storm Mora in 2017. – SUN PHOTO

Parki Beach, situated in Anwara upazila of Chattogram, could be an attractive tourist spot if the authorities take necessary steps to develop the sandy beach.

Though the beach has the prospect of becoming a good-looking tourist spot like Patenga Beach, the government authorities never allocated a single penny for developing the resourceful beach, sources said.

They said the beach has failed to draw attention of the visitors in the absence of infrastructural development.

Due to lack of residential accommodation and security measures, tourists have to leave the beach before the sunset. Moreover, narrow and dilapidated roads, lack of transportation and restaurant facilities are keeping the visitors away from Parki Beach, near the Karnaphuli river channel.

Chief Executive Officer of Bangladesh Tourism Board Bhubon Chandra Biswas told the daily sun that they do not have any plan to develop Parki Beach right now but the spot is likely to be included in their next master plan for tourism.

“If the local administration requests us to carry out integrated development, then we will take a move in this regard,” he said.

During a recent visit to the beach that offers a chance to view the Bay of Bengal and the river Karnaphuli at a time, this correspondent found that about 2,000 to 2,500 visitors come to the beach every day. The number of visitors, however, reaches 4-5 times higher on weekends and holidays, locals said.

The beach could be a source of income for local people but resources of this beautiful beach remain mostly unused as the authorities concerned are oblivious over the issue, they said.

Some 17km away from the port city, all sorts of man-made waste, including beverage bottles, packages of food and coconut shells, were found scattered all around the beach.

There are around 102 makeshift shops that are set up on the beach without any visible restriction enforced by the authorities. But those makeshift shops have recently been evicted by the local administration.

“Even an eviction drive was conducted recently so that unauthorised people cannot set up makeshift shops in beach area,” he said, adding that extensive plan is needed to make the beach popular among the visitors.

The beach offers a unique opportunity to view the Bay of Bengal and the river Karnaphuli at a time. While watching the sunset, visitors here can enjoy the view of large ships anchored at the outer dock of the port, fishermen catching fish in the sea, a Jhau forest and fish enclosures.

170-metre bulk carrier Crystal Gold vessel was stuck at the beach due to cyclonic storm Mora in 2017 and which is threatening the environment. Legal complications have arisen in moving of the vessel to a ship breaking yard in Sitakunda.

Sources said the ship is becoming risky. The ship was partially dismantled and two visitors died recently as they went so close to the vessel during torrent.

Unable to move the vessel, its owner took an initiative in December last year to dismantle the vessel on the beach but the Department of Environment fined it some Tk 2 crore claiming no clearance was taken, sources said.

But local people spoke against the removal of the vessel from the beach. Instead, they urged the authorities to use the vessel for increasing beauty of the beach.

MA Qaiyum Shah, chairman of Barasat Union Parishad, claimed a move was taken in 2013 so that the government declared it a tourist spot.

“But the development activities were halted for unknown reasons since long,” said Qaiyum, also a member of Chattogram Beach Management Committee.

He said no meeting of the beach management committee was held in the last three years.