Not concerned about Mash’s form: Walsh 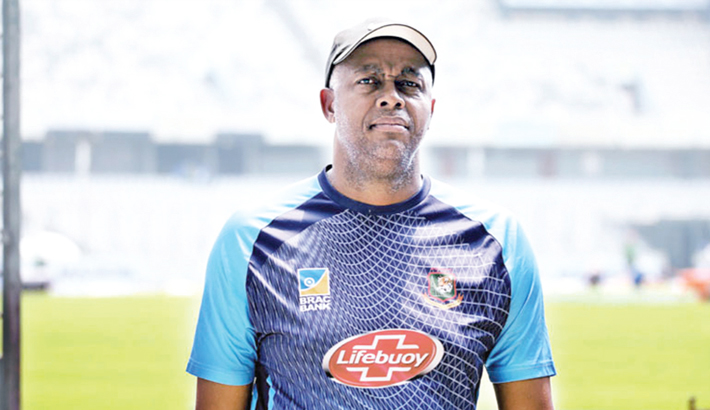 Bangladesh’s pace bowling coach Courtney Walsh said that he is not concerned with the form of Mashrafe Mortaza despite below-average performances in the ongoing World Cup.

Mashrafe picked up only one wicket in the tournament so far during 44 overs that he bowled in the six games that saw him leaking 279 runs with an economy 6.34.

Mashrafe’s performance dipped largely due to the hamstring injury which he sustained in the Tri-nation Series in Ireland but despite everything his performance raised quite a few eyebrows that prompted the media to ask Walsh whether he is happy with the skipper’s performance or not during a press conference in front of the team on Saturday.

Bangladesh have got two more group-phase games left in the tournament respectively against India and Pakistan and they have to beat both their opponents and see how it stands elsewhere if they want to progress to the semi-final  they need their inspirational skipper to lead from the front.

“Wickets are not the only thing and well he has not got enough wickets as we know,” said Walsh.

“He (Mashrafe) is playing well and bowling to the best of his ability. I am sure the wickets will come. I am not really concerned about picking up wickets,” he said.

“I am more concerned about keeping them bowling a tight line and length and do my job,” he said.

Mashrafe’s performance in the World Cup came under scrutiny as well due to the fact that he is not delivering like the way he used to deliver before.

Walsh looked a little worried with how the Birmingham pitch will behave when they take on India on Tuesday.

He instead said that his side is equipped well to deal with in any kind of conditions after finding their last two matches as ‘must-win’ game to reach the semifinal of the World Cup.

Walsh’s comment came in the wake of World Cup pitches’ surprising behavior in last week as most of the games turned out to be low-scoring affairs. Some pitches offer bounce and swing for the pacers while some pitches proved to be conducive for spinners.

Bangladesh will play their game against India at Edgbaston in Birmingham, which traditionally a slow wicket. But the match between India and England was a run-fest, giving a hint that early prediction on wicket can back fire.

Therefore Walsh didn’t try to predict the wicket rather he kept his bowlers ready to deal with any kind of condition.

“We are just trying to get everybody ready. Anybody should be able to bowl with the new ball,” Walsh said.

“We have got three seamers playing now and Rubel (Hossain) played in one of the games before. So, any of those guys could bowl with the new ball because we are trying to get them ready for that. Obviously, if things are swinging and there is bit of moisture in the air. (Mohammad) Saifuddin gets a little bit more swing than probably Mustafizur. But Fizz still gets a bit of shape so and then, as you know Mashrafe is always swinging it around. So, it’s a good option to have and it’s just, as I said before depends on the surface on the day,” said Walsh.

“We have to assess what’s going to happen here in Birmingham. If the wicket’s going to turn then it’s best for us to have a spinner bowling earlier as well as trying to get early wicket,” he said.

“So, we’ll have a look at the game to see what the wicket has been like today (Sunday) for this game. But obviously with the new ball if there is going to be any swing or movement, we would want the seamers to use it as well. So, I think it depends on how the surface holds and how well we react on the day,” concluded Walsh..