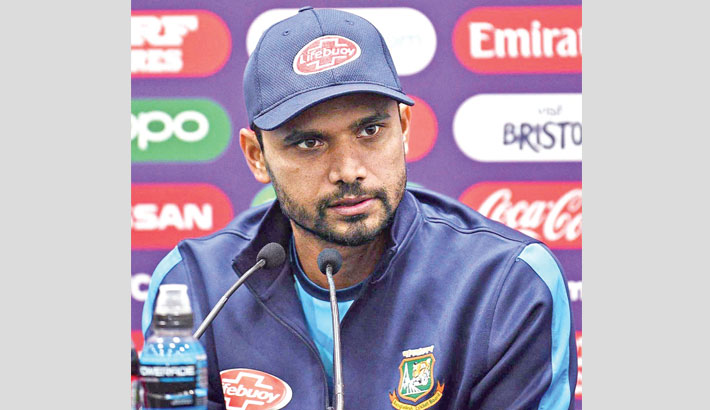 Bangladesh skipper Mashrafe Mortaza insisted that they are not bothered about the small ground of Taunton as he feels that it will be equal for both the teams.

Bangladesh will take on West Indies at Taunton in a must-win game as both team’s accumulated three points from four matches but more than anything else the size of the Taunton ground turned out to be the major issue ahead of the crucial game of Tigers.

Considering West Indies have a lot of explosive batsmen at their disposal it was believed that the small ground would help them more than their opponent, though Mashrafe thinks otherwise.

“I’ d say we don’t think about this ground. A small ground is also good for us. So I think it will go equally for both teams and we will play with that mindset,’’ Mashrafe told reporters at the pre-match press conference on Sunday.

“Actually, both teams got the same point. But I think it’s time to think about ourselves only. If you understand this tournament obviously a few matches left but tomorrow’s a very important match for us, especially losing I would say elsewhere, but I would say especially losing few points in the last three matches. So hopefully we’ll play well tomorrow,’’ he said.

Mashrafe added that they are yet to take any decision on Mehedy Hasan as there is a lot of speculation that he might not be in the playing XI considering the size of the ground and pave his way for Rubel Hossain.

“Yeah, obviously, we’ve been quite successful against them with some offspinners. So we have to think about it as well. And if you look at recently, I think, Mehedi bowled really well against them. And also he’s bowling so well in this World Cup as well, even to the right-handers,’’ said Mashrafe.

“So obviously the top five West Indies are left-handers, which Mehedi bowled against them really well. So it’s a positive sign. And the same thing I’ll say that it’s a small ground, too, so we have to think about it as well. So one side we will be very stronger. So West Indies has so much power to do it,’’ he added.

“I think the bowlers come hard. And the kind of cricket they played, there’s always still positives and play shorts into the middle, which is good, which can be bad, both ways. So we take it positively that, as we said, the matchup, I think our bowling has been fantastic against them last two, three series we played against them. So I think we have to take this positive stuff and the ground and do our best,’’ he said.

Mashrafe added that he is disappointed to lose against New Zealand as that had been hurting them as he feels that might cost them dearly in the long runs.

“If you reassess the previous things, I think we lost against New Zealand, that might cost a little bit. But again we have still five matches left, as I said, that if we can take one by one at a time, and if we perform really well, which is in the World Cup, you have to do it. You can’t just always think this match can win. And if you can’t win the next many you’ll get down yourself,’’ Mashrafe concluded.