US industrial output rebounds in May 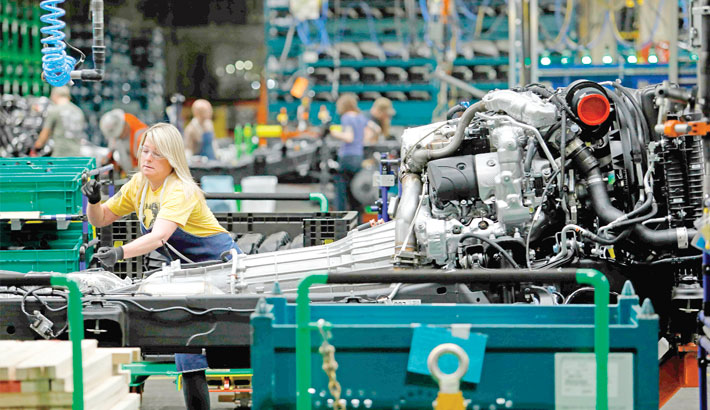 Line workers assemble the chassis of full-size General Motors pickup trucks at the Flint Assembly plant recently in Flint, Michigan. US industrial output rebounded in May due to a jump in utilities and recovery in auto production but the trend this year remains sluggish, the Federal Reserve said on Friday.

WASHINGTON: US industrial output rebounded in May due to a jump in utilities and recovery in auto production but the trend this year remains sluggish, the Federal Reserve said Friday.

With American manufacturing hurt by the ongoing trade wars and the slowdown in China and other trading partners, the uptick last month may be small comfort, reports AFP.

Total industrial production rose 0.4 percent compared to prior month, double the gain economists expected, but was nullified by the 0.4 percent drop in April, according to the report.

Although output is up two percent compared to May 2018, it has been slipping the so far this year with a cumulative decline of nearly one percent from January to May.

The manufacturing sector especially is feeling the pain, with the 0.2 percent uptick in May failing to offset the 0.5 percent drop in April, with a decline of 1.5 percent in the first five months of the year.

The report notes that the recovery in production of motor vehicles and parts, which had been falling, was offset by two months of declines in aerospace -- which could reflect continued troubles at Boeing due to the grounding of its 737 MAX aircraft. Ian Shepherdson of Pantheon Macroeconomics notes that a calendar quirk is partly to blame for the big swings in the latest two months but said the pain in manufacturing is real.

"We're under no illusions about the weak underlying trend in the manufacturing output. The sector is suffering badly from both the slowdown in China's business cycle and the trade war, which has made a challenging situation worse," he said in a research note.

Utilities going into the summer months jumped 2.1 percent compared to April, erasing most of the drop in the prior month, while mining posted a very modest gain but is up 10 percent compared to May 2018. Industrial capacity in use halted a string of declines, rebounding slightly to 78.1 percent. President Donald Trump has repeatedly touted the strong first quarter growth figures as proof his economic policies and tough trade tactics are producing results.