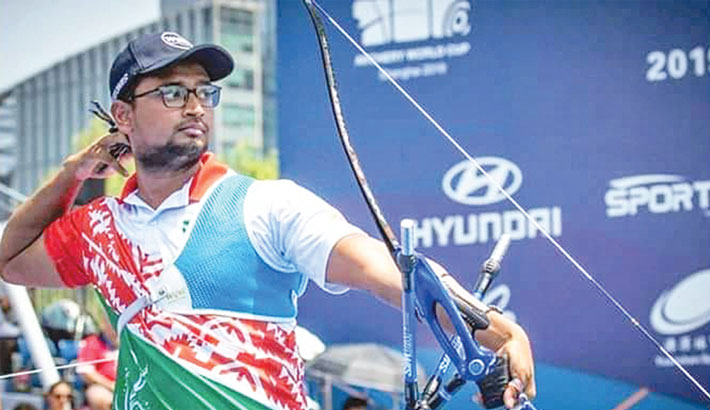 Bangladeshi archer Ruman Shana in action during the semi-final of Hyundai World Archery Championship 2019 at s-Hertogenbosch in the Netherlands on Thursday.

Bangladeshi archer Ruman Shana made history by confirming the ticket to the Tokyo 2020 Olympic Games in archery, despite suffering defeat to his Malaysian rival Khairul Anuar Mohamad by 3-7 set points at the semi-final of Hyundai World Archery Championship 2019 at s-Hertogenbosch in the Netherlands on Thursday.

Ruman is the second Bangladeshi athlete to qualify the Olympics directly after ace golfer Siddikur Rahman. Siddikur earned the Olympic quota for the Rio Olympics in 2016.

Despite the loss in the semi-final match, Shana’s result was enough to qualify for the Tokyo Olympics. Playing at the semi-finals is also the best ever performance by any Bangladeshi at the world’s top archery competition.

“I don’t know how to explain, I’m really so happy. Proud of me; so happy. My target was quarterfinal but my shooting is very well today (Thursday),” said Ruman. “In my dream, I’m beating a Korean guy and I did it. So I’m so happy.”

“It’s a proud moment for all the people of Bangladesh. Sana made us proud. With this remarkable performance all coaching staff, federation officials, sponsors are happy. Now we are looking forward to achieve something from Tokyo,” said national archery team’s German coach Martin Fredrick.

These world championships are the primary qualification event for the archery competitions at Tokyo 2020.

Earlier in the week, Bangladesh faced top-seeded Korea in a third-round match that would award a team quota to the Games. Korea won, 6-2. In the fourth round, he came up against Korea once again – and two-time World Archery Champion Kim Woojin. But Woojin wasn’t on point and Ruman took advantage. The world number 40 upset the world number four, 6-4.

The victory booked Shana a place in the quarter-finals with Khairul Anuar Mohamad of Malaysia, Mauro Nespoli of Italy and Brady Ellison of the USA. All four won individual Olympic quota places for their countries.