Doping gangs on the prowl ahead of Eid 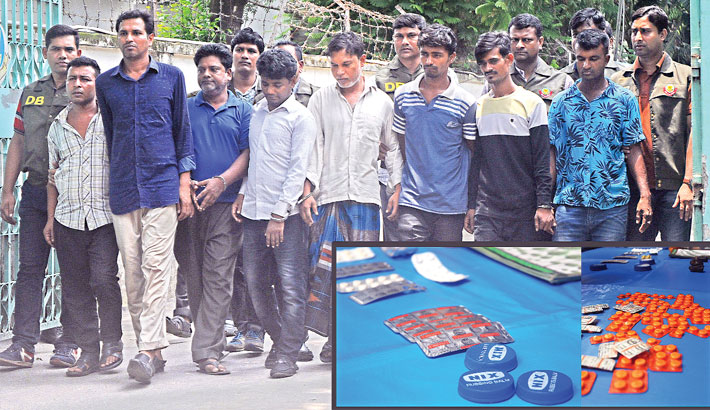 Some members of a dope gang, popularly known as ‘oggyan party’ or ‘molom party’, were produced before newsmen at DB office in Minto Road in the city on Saturday. — sun PHOTO

With the Eid-ul-Fitr festival approaching nearer, organised criminal gangs, including Aggyan party (doping gang), are roaming at different crowded places such as shopping malls, bus stands, railway stations and launch terminals in the capital and its outskirts.

Cashing in on shopping spree ahead of the Eid festival, the criminals  are mainly targeting shoppers, police sources said.

Many innocent people, mostly bus and CNG-run auto-rickshaw passengers fall prey to these gangs and lose their cash, gold ornaments, mobile phone sets and other valuables.

In separate drives, law enforcers detained 65 members of a ‘doping gang’ from different areas in the capital during the last 24 hours till Saturday noon.

Tipped-off, law enforcers nabbed them and recovered food items mixed with sedatives from their possession, a DB official said.

According to Dhaka Medical College Hospital (DMCH) record, more than a  dozen people, including drivers of CNG auto-rickshaws and traders, fell victim to  Aggyan party men and lost their cash  and valuables last week.

Intelligence sources said there are over 500 members, including women, of 20-30 doping gangs are active in the capital and its outskirts—Tongi, Savar, Keraniganj and Siddhirganj.

Most of the victims include traders and passengers of buses, taxi-cabs and drivers of CNG auto-rickshaws and rickshaw pullers,  DMCH sources said.

According to DB sources, each group comprised of four members move together from Aminbazar to Narayanganj and Sadarghat to Tongi, trap their targets and snatch their belongings.

On many occasions, the gangsters  use beautiful girls to trap their targets.

Besides, other busiest and most commercial areas including Motijheel, Gulistan, Mohakhali, Shahbagh, Paltan, Dainik Bangla, Khilgaon railgate, Gulshan, Mirpur and Banani areas are not free from their hegemony.

The gangs first target a person and then somehow feed the target sedative mixed with water, biscuits or other food items including coconut water.

After their targets become unconscious they make away with the victims’ belongings.

Passengers, taxi-cab and CNG-run- auto-rickshaws drivers and rickshaw-pullers are usually the prime targets of the gangs, sources said.

While visiting the medicine ward of the DMCH recently, several unidentified men were lying on its veranda in an unconscious state. They are being treated there.

Contacted, Joint commissioner of DB police Mahbub Alam said for not sufficient witnesses in the cases, most of the arrestees get release from the jail and get involved in such immoral act afresh.

Deputy Commissioner (DC) of Dhaka Metropolitan Police (DMP) Masudur Rahman said a large number of law enforcers—both in uniform and plain-clothes — are now working at different strategic points in the capital to catch the criminals as well as the so-called Aggyan-party men.