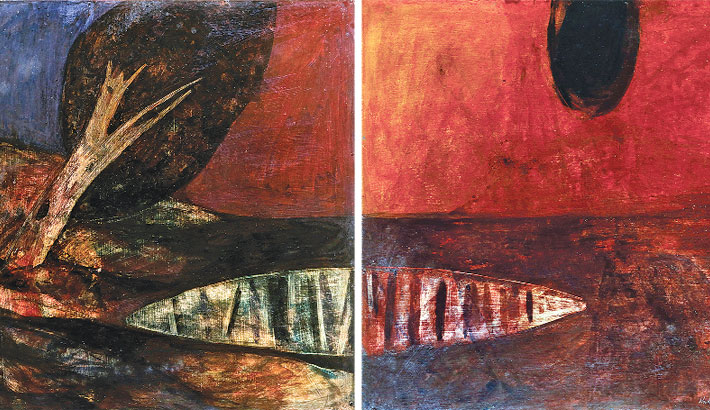 Wakilur Rahman’s month-long solo painting exhibition titled ‘Bodyspace/Mindscape’, organized by 180 Degrees, was inaugurated jointly by Nisar Hossain, Dean, Faculty of Fine Arts, University of Dhaka and artist-cum-critic Mustafa Zaman on May 1, 2019 at Dwip Gallery, Dhanmondi. This exhibition is featuring Berlin-based artist Wakilur Rahman’s works that were created during the period from 1989-1991 (when he starting living in Berlin).

His 23 artworks exploring mysterious feelings of the physique and psyche are on display. The concept of physiology gets reflected on his abstract imagination with a focus on structuralism. Skeleton comes as a form while bird or horse with wings comes as a final desire in his artworks.

“Things such as tradition, self-identity, art and art-related crises always arouse my consciousness. Indian philosophy, baul and folk ideas also attract me. I am also inspired by artworks created by eminent Bangladeshi artist Shahid Kabir and renowned Indian artist Ganesh Pyne. All these actually have dragged me into art practice”, said the artist about his exhibition.

Artist Wakilur Rahman, an independent curator, has been addressing social issues through his artworks since the 80s. He has always been a driving force in the local art scene owing to his new ideas and noble thought process. He has received several awards at home and abroad for his contributions to the art arena.