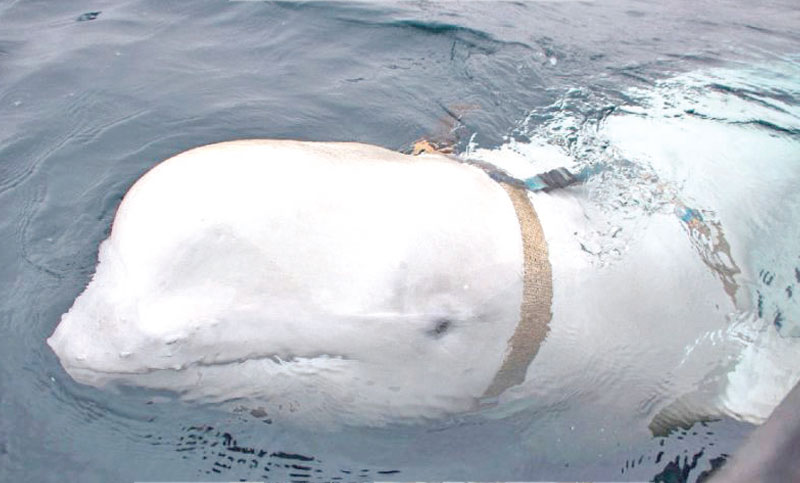 A spy, a far away visitor or a fugitive on the run? A mysterious Beluga whale, caught wearing a suspicious harness, has ignited the imaginations of Norwegians who have yet to receive answers.

The whale has been delighting locals in the area of Finnmark in the far north of Norway for the last week, reports AFP.

But more than a week after it was first spotted by fishermen in the Arctic waters off the coast of northern Norway its origin remains unknown. When Jorgen Ree Wiig, a marine biologist working with the Norwegian Directorate of

Fisheries tracked down the mammal with the help of a fisherman and two colleagues on April 26, they managed to remove an obviously man-made harness attached to it.

The harness had a mount suited for an action camera and the text “Equipment St. Petersburg” printed on the plastic clasps.

Wiig told AFP on Friday he believed the whale could have come from neighbouring Russia, where he believed it might have escaped an enclosure.

“The whale is so calm around humans and goes up to boats so it seems to have been accustomed to humans,” Wiig said. Another theory supported by Wiig was that the whale could have been trained by the Russian navy as “they have been known to do so before.”

Its ease with humans, the markings on the harness together with reports of the Russian Navy training Beluga whales has led many Norwegians to speculate that it could be a “Russian spy.”

Moscow has not issued any official reaction but an officer quoted by the media has mocked the idea, arguing that the military would not be stupid enough to “leave their phone number” on an animal trained for clandestine activities.

The Barents Sea is a strategic geopolitical area where Western and Russian submarine movements are monitored.

It is also the gateway to the Northern Route that shortens maritime routes between the Atlantic and Pacific oceans.

Dmitry Glazov, a scientist working at the Severtsov Institute of Ecology and Evolution of the Russian Academy of Sciences, told Russian news agency Interfax that the Russian Navy had programmes involving whales and that they were in part operating out of Murmansk.

“It is a fact that the military has these animals. Among other things, they used them during the Sochi Olympics,” Glazov said Monday.

There are also private travel agents around Murmansk advertising tours that involve meeting or diving with Belugas kept in enclosures in the White Sea south of the Kola peninsula.

AFP has reached out to two of these agents but has been unable to get a response, as it was a public holiday in the country.

The harness itself has been transferred to the Norwegian Police Security Service (PST), but Martin Bernsen, communications officer at PST, said it was unclear whether they would find anything.

“We must admit that examining technical equipment attached to whales is not a daily occurrence for PST,” he told AFP.

“The whale is not a suspect in our investigation, for now,” he added.

Another theory on the origin of the whale is that the “Equipment St. Petersburg,” since it’s written in English, might refer to the St. Petersburg in the US state of Florida, where there are water parks with Beluga whales, such as Seaworld in Orlando.

According to Jorgen Ree Wiig it wouldn’t be inconceivable for the whale to have travelled from there.

“They can swim quite far and especially young males have been known to travel very far,” Wiig said.

This hypothesis is supported by videos showing local residents throwing plastic rings in the water which the whale brings back.

Its path would then be reminiscent to that of the famous killer whale Keiko, star of the film “Free Willy” (1993), who once released into the wild outside Iceland swam to the coastal waters of Norway.

No water park has however yet reported the disappearance of a Beluga whale.

Wherever it’s from, the whale has become quite the celebrity, and a poll to name it was conducted online by Norwegian broadcaster NRK and gathered 25,000 votes.

Thirty percent of the votes went to the name “Hvaldimir”, a pun on the word whale in Norwegian and a nod to its alleged association to Russia.

Beluga whales, which can reach a size of 6 metres and live to between 40 and 60 years of age generally habitate the icy waters around Greenland and northern Norway and Russia.

A sociable species related to dolphins, it travels in pods and the observation of an isolated individual is rare.