The Story Of The Youngest Cardiac Surgeon Of South Asia 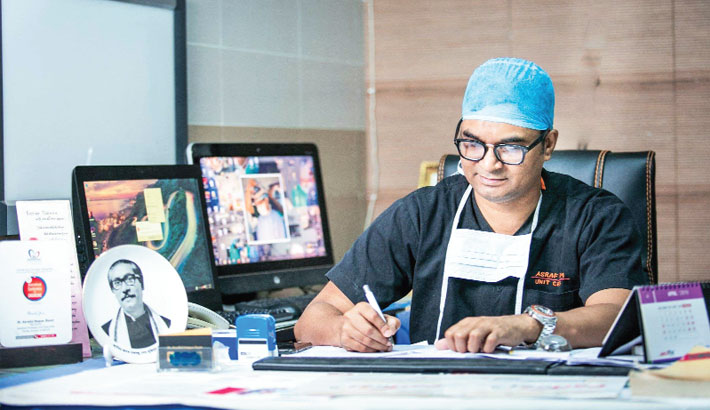 The Latin phrase ‘veni, vidi, vici’ can be attributed to him as he has not taken much time to win the hearts of the people. Through his cordial efforts, service and efficiency he has established himself as a role model for many youths who dream of doing something for the well-being of the ordinary citizens of this country. He is none other than Dr. Asraful Hoque Sium, the youngest cardiac surgeon of South Asia. Currently he is working as the assistant professor and unit chief of Surgery Unit-9 of the Department of Cardiac Surgery at National Institute of Cardiovascular Diseases (NICVD).

Asraful Hoque Sium earned his MBBS degree from Bangladesh Medical College in 2005. Then he worked under the supervision of Dr. Lutfor Rahman, chief cardiac surgeon of Labaid Hospital, for three years and Professor Dr. Farooque Ahmed, chief cardiac surgeon of National Heart Foundation Hospital and Research Institute, to develop his skills in cardiac surgery. Dr. Sium secured first position in the admission test of his MS course. After completing MS in cardiovascular and thoracic surgery from NICVD, he joined as the resident cardiac surgeon of the same institute at the age of 35. One year later he was promoted to the position of assistant professor. This talented surgeon has been serving as the unit chief of Unit-9 since 2017. Many cardiac surgeons of the country dream to become a chief cardiac surgeon as it is always considered as a matter of honour for them. Through his dedication and expertise Dr. Sium has become the youngest cardiac surgeon of the country to hold this position. While talking to this correspondent he shared, “Cardiac surgery is a difficult task and it is a team work. Experience, skill, patience and intelligence are essential to conduct critical operations like bypass surgery, valve surgery and birth related heart problems. That is why a cardiac surgeon usually becomes a unit chief at the age 45. But I am fortunate that I have reached this position at an early age.”

According to the Cardiac Surgeons Society of Bangladesh (CSSB), there are only 15 to 20 chief cardiac surgeons in Bangladesh. Dr. Sium is one of them. Prime Minister Sheikh Hasina awarded him as the youngest cardiac surgeon in the 26th Annual Congress of the Association of Thoracic and Cardiovascular Surgeons of Asia in 2016. Apart from this, he has also received a number of other awards and honours. Dr. Asraful Hoque Sium has participated in various international conferences worldwide. His articles have been published in some of the reputed international medical journals. Thus his success as a cardiac surgeon at a young age has impressed the renowned cardiac surgeons of South Asia.

Hailing from Shariatpur Asraful Hoque Sium passed SSC from Khilgaon Government High School & College and completed his HSC from Dhaka College. He is the youngest son of engineer Md. Abul Hashem Mia. Dr. Sium’s mother Begum Ashrafunnesa obtained the ‘Ratnagarva Ma Award’ in 2004. He has two brothers and a sister. His elder brother AKM Enamul Haque Shamim is serving as the organising secretary of Bangladesh Awami League. He is a Member of Parliament and Deputy Minister of the Ministry of Water Resources. Sium’s another brother Brigadier General Md. Amin has been working in Bangladesh Army and his only sister Shamim Ara Haque Kakali is a vice-president of a private bank.

Dr. Asraful Hoque Sium always recognizes his mother’s role in shaping his dream. He said, “My mother sowed the seed of chasing the dream of becoming a doctor in me. Her constant motivation and my hard work have made me successful.”

It is mentionable that the number of total cardiac surgeons in our country is more than 200. They have succeeded in achieving the trust of the patients. But when Dr. Sium began his career as a cardiac surgeon, the whole scenario was quite different. He went on to say, “When I was a medical student in 2002-2004, operating bypass surgery had just begun in Bangladesh on a limited basis. At that time most of our cardiac patients used to go abroad for their treatment. I took interest and decided to be a cardiac surgeon to serve the country.”

While describing the situation of cardiac surgeons of Bangladesh Dr. Sium said, “Cardiac surgery is a very complicated process. There is no room for inaccuracy. But we do not have enough suitable hospitals for conducting cardiac surgeries in our country. That is why many cardiac surgeons do not get the chance to practice properly with a view to preparing themselves for such surgeries. I think lack of practice leads to lack of confidence. Thus we need more hospitals with modern amenities to conduct cardiac surgeries.”

Well, Dr. Sium has already accompanied other expert cardiac surgeons in more than 500 surgeries till date. He himself conducted more than 110 surgeries last year. His success rate was 97 percent which is quite impressive. This eminent surgeon has also done CABG with ‘jump grafts’ for the first time in the history of NICVD.

To conclude, Dr. Asraful Hoque Sium has observed that the cost of cardiovascular treatment is affordable for the ordinary people in our government hospitals but it is very expensive in the private hospitals. And only a few hospitals have the necessary equipments and expert doctors to operate cardiac surgeries. Therefore, despite having opportunity to work in the local and international private hospitals, Dr. Sium has preferred to work in a government hospital. His only vision is to stand beside the poor and under-privileged patients of the country. Thus even during the holidays he goes to the countryside and organizes campaigns and medical camps to urge the mass people to avoid risky foods so that they can have a strong heart.