It is govt’s responsibility to ensure expatriates’ welfare 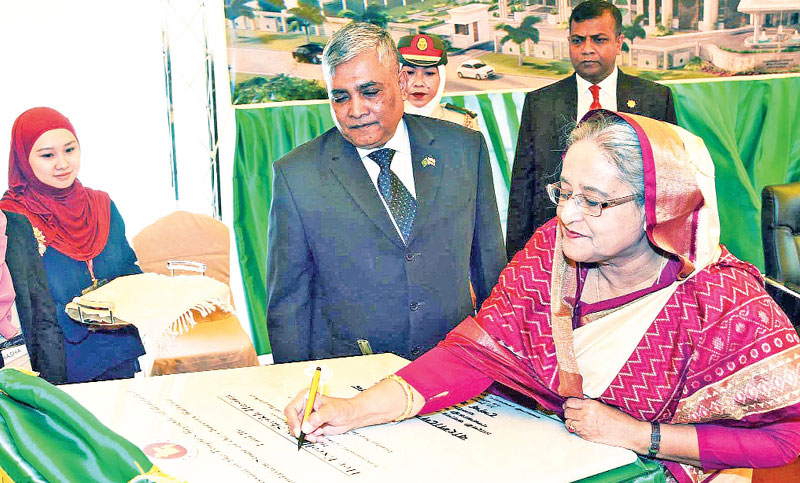 Brunei:  Prime Minister Sheikh Hasina on Tuesday thanked the expatriate Bangladeshis for their special contributions towards increasing forex reserve, saying that it is a responsibility of her government to ensure their welfare, reports BSS.

“The expatriate Bangladeshis have special contributions to boosting forex reserves. Especially the role of the workers in this regard is great. So, it’s our duty to look after their betterment,” she said.

The prime minister said the expatriates are also playing an important role in infrastructural development and economy of those countries where they are working.

She made the remarks while addressing a function here this morning marking the foundation laying stone of new Chancery Building of Bangladesh High Commission at the Diplomatic Enclave at Jalan Kebangsaan in Brunei capital.

The premier said her government is giving priority to construct own mission buildings where the number of expatriates Bangladeshis is more.

“Bangladesh missions will have their own buildings in every country in phases,” she said.

Sheikh Hasina said she has already given directives for establishing at least one Bangladeshi school in every country where large number of Bangladeshi expatriates are living so that their children can pursue study there properly.

The prime minister said when Father of the Nation Bangabandhu Sheikh Mujibur Rahman was rebuilding the war-ravaged nation, he purchased some buildings for Bangladesh mission.

But after his assassination, she said, nobody took any initiative in this regard. When Awami League government assumed office after long 21 years, it took steps for construction of own missions in different countries including the USA, India and Japan, she said.

“We also took decisions to buy lands for construction of our own missions in different countries,” she added.

Lauding the architectural design of Bangladesh’s Chancery Building in Brunei, the prime minister put emphasis on construction of the mission building by keeping consistency with local weather, environment and other infrastructures.

The premier thanked the main architect of Bangladesh’s Chancery Building in Brunei Rozain Mery Yanti and her team for preparing a beautiful design of the building.

“Through the Chancery Building, the expatriate Bangladeshis will get better services and it will help them move here smoothly,” the premier added.

In this connection, Sheikh Hasina said she will visit Brunei again for the inauguration of the building which will be finished by 18 months.

The prime minister said her government is constructing Bangladesh missions one after another. “The construction work of Bangladesh’s Chancery Building in Italy has almost been completed,” she said, adding that she will visit Italy to open the building.

Terming Brunei as a very beautiful country, she said there are many places like Brunei which Bangladeshi businessmen are yet to explore. “Such places can be new areas for our business and trade,” she added.