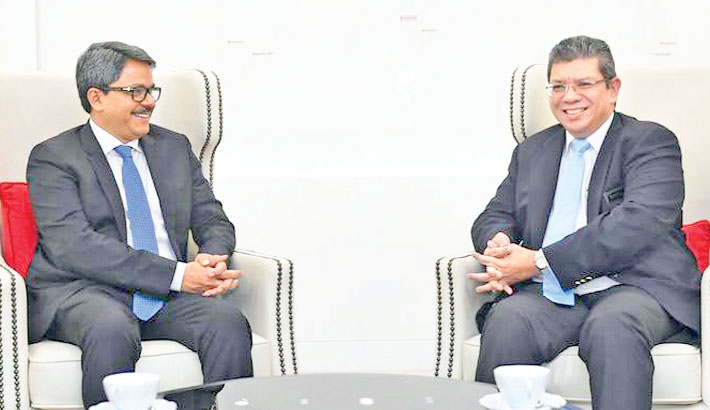 State Minister for Foreign Affairs Md Shahriar Alam calls on his Malaysian counterpart at the latter’s office at Kuala Lumpur in Malaysia on Monday. -SUN PHOTO

Malaysian Foreign Minister Dato Saifuddin Abdullah on Monday said that Bangladesh would remain an important source of workers for Malaysia.

He came up with the statement during a meeting with Bangladesh State Minister for Foreign Affairs M Shahriar Alam in Kuala Lumpur.

It is a private sector and track-II level forum of five OIC countries in the region -- Bangladesh, Brunei, Indonesia, Malaysia and Maldives with an objective of advancing regional economic integration.

The forum in the emergence is going to function in the model of World Islamic Economic Forum (WIEF) exclusively with the agenda of economic cooperation among the members’ countries and their neighborhoods. Bangladesh has taken the initiative and is ready to host SEACO’s launching conference in Dhaka towards the end of June 2019 with expected participation of the foreign ministers along with the public and private stakeholders.

The State Minister in his meeting with the Malaysian Foreign Minister reviewed the entire gamut of bilateral relations and discussed export of manpower from Bangladesh and their well being, bilateral trade and investment.

The Rohingya issue also figured prominently in the discussion where they agreed on enhanced role of the ASEAN in the repatriation of the forcibly displaced Rohingyas sheltered in Bangladesh.