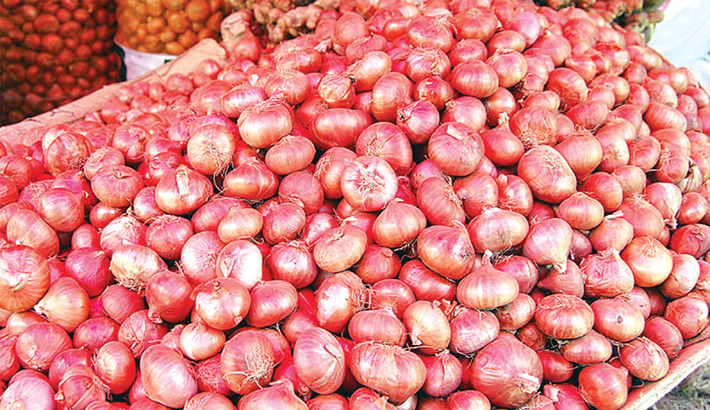 Onion farmers across the country are worried as the price of the common spicy vegetable item has nosedived at the growers’ level soon after the start of harvesting.

Unplanned onion import during the harvesting season is forcing the growers to sell their produce at lower price, experts said.

In Rangpur, Nilphamari, Dinajpur, Kushtia and Bogra, onion has been selling at between Tk 650 to Tk 800 per maund (40 kg) from the third week of April.

Onion price has come down in the capital’s kitchen markets to Tk 18 to Tk 25 a kg this week from Tk 30 to Tk 35 per kg in the last week of February.

While local onion was selling at Tk 35 a kg in the corresponding period last year, according to the Department of Agriculture Marketing (DAM).

According to Bangladesh bank data, L/Cs for onion import opened during July 2018 to February 2019 were worth $159.90 million.

Agri Economist Prof ASM Golam Hafeez, Department of Agricultural Finance under the Faculty of Agri Economics & Rural Sociology in Bangladesh Agriculture University (BAU), said the government should impose restrictions on onion import during the harvesting seasons as the farmers witnessed a bumper production of onion in recent years.

When an adequate amount of food grains is available in the country, such a bulk of onion import will affect local farmers, he said.

He added that the farmers did not get fair price of Aman paddy and now they are not getting fair price of onion. If such practice continues, the farmers will be demoralized, and that may affect the country’s food production.

Akmol Hossain, a farmer from Kumarkhali in Kushita, said last year he earned a lot by producing onion, but this year he did not meet the production cost after selling onion.

He said onion was selling at Tk 600 to 700 per mound (40 kg) in the local market called Joybangla Bazar in Kumarkhali.

The production cost of onion was Tk 17a kg but he sold it at between Tk 15 and Tk 17 a kg in the local market.

If the government does not take any steps, the onion farmers will incur a huge loss this year, he said.

This year the DAE fixed the target to produce 23.76 lakh metric tonnes of onion from 2.16 lakh hectors of land in the country.