MPs urge UK to cooperate with Sweden in Assange case 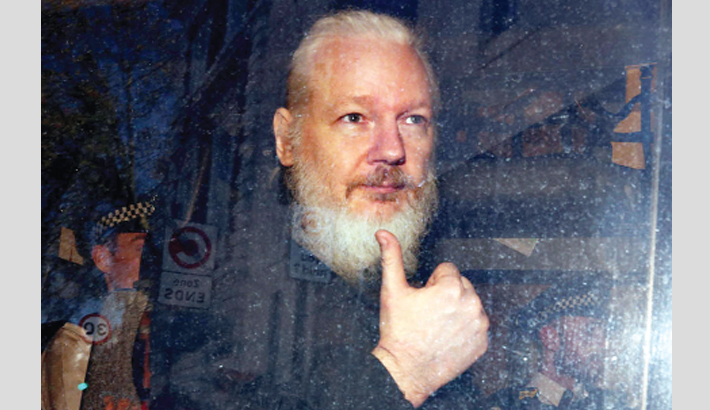 LONDON: More than 70 British lawmakers have urged their government to prioritise any extradition bid Sweden might make for WikiLeaks founder Julian Assange, who is also wanted in the United States, reports AFP.

Assange was arrested on Thursday at Ecuador’s London embassy on allegations of skipping bail, and on a US extradition warrant related to a huge leak of official documents.

He had sought refuge in the embassy in 2012 while on bail awaiting extradition to Sweden for allegations of sexual assault and rape, which he always denied.

In the letter, the MPs and peers urge British Home Secretary Sajid Javid to “give every assistance to Sweden should they want to revive and pursue the investigation”.

British law states that if Sweden does make an extradition request, it would be up to Javid to decide which should take precedence.

“We must send a strong message of the priority the UK has in tackling sexual violence and the seriousness with which such allegations are viewed,” the letter says.

The sexual assault claim expired in 2015 and Swedish prosecutors dropped a preliminary investigation into the rape allegation in 2017, arguing that since Assange could not be reached, they could not proceed.

Following his arrest, however, the alleged rape victim asked that her case now be reopened—but the limitation period on this claim expires in August 2020.

“We do not presume guilt, of course, but we believe due process should be followed and the complainant should see justice be done,” the letter says.

The MPs and peers add that it is “of grave concern to us” that the Swedish authorities did not appear to have prior warning of Assange’s arrest, unlike the US authorities.

The letter was also copied to Diane Abbott, the home affairs spokeswoman for the main opposition Labour party.

Abbott said: “Assange skipping bail in UK, or any rape charge that may be brought by Swedish authorities shouldn’t be ignored.

“But the only extradition request is from USA, because he’s a whistle-blower on atrocities caused by US military ops. This extradition would be wrong so we oppose it.”

Assange is currently being held at the high-security Belmarsh jail in southeast London.

The 47-year-old Australian claims the Swedish cases against him were politically motivated, linked to the leak in 2010 of a huge number of US military and diplomatic documents.

He sought refuge with Ecuador, claiming that his extradition to Sweden was a pretext for his transfer to the United States.

But Ecuador withdrew his asylum status and allowed British police into the embassy on Thursday to arrest the white-bearded Assange.

He appeared in court a few hours later and was found guilty of breaching his bail terms back in 2012. He could be jailed for up to a year when he is sentenced at a later date.

The separate extradition case on US charges of computer hacking is set for May 2, although the United States has until June 12 to submit full extradition papers.