Sincerity in our deeds 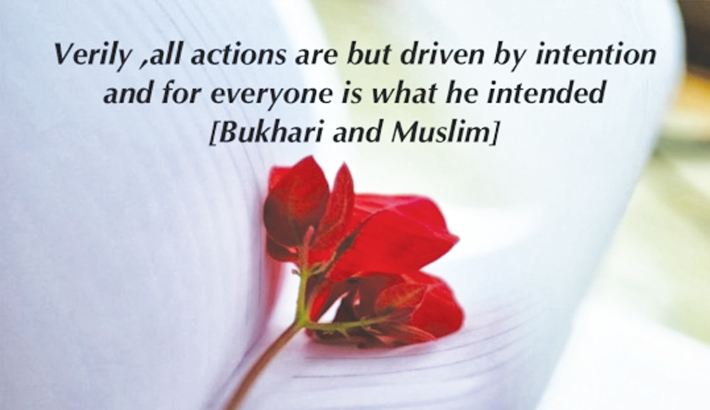 We should remember that our all deeds and actions depend upon our niyyah (intentions), If there in not sincerity in our actions this is not acceptable to Allha (SWT). The duty in worship has to be purely for Allah alone.

When we do acts of worship, we should do it sincerely and purely for the sake of Allah (SWT) alone, as Allah (SWT) says:

“And they were commanded not, but that they should worship Allah, and worship none but Him Alone (abstaining from ascribing partners to Him), and perform As‑Salaah (Iqaamat‑as‑Salaah) and give Zakaah, and that is the right religion” (Sura Al-Bayyinah, Ayat 5). Allah (SWT) said, “And who has (in mind) no favour from anyone to be paid back, except to seek the countenance of his Lord, the Most High.” (Sura Al-Layl, Ayat 19-20).

And the Prophet (pbuh) said, “Allah (SWT) does not accept any deed except that which is done only for Him and to seek His countenance.” (Sunane Nasayi, 3140).

So the Ikhlas (sincerity) in our actions and statements is utmost important for the acceptance of our deeds. ‘Umar (Ra) said, “I heard the Messenger of Allah (pbuh) say: 'Verily, the reward of deeds depends upon the Niyyah (intentions) and every person will get the reward according to what he has intended.” (Sahih Bukhari, and Sahih Muslim).

When we start to do any act of worship, we should correct our intention, and bear sincerity in our mind, because sincerity is most important in every deeds of Muslims for its acceptance to Allah (SWT), because any worship can only be acceptable to Allah (SWT) if it meets two conditions:

1 – It is done sincerely for Allah (SWT) alone.

2 – It follows the Sunnah of Prophet (pbuh) and is in accordance with his shariah.

These two conditions are indicated by the verse in which Allah (SWT) says: “So whoever hopes for the meeting with his Lord, let him work righteousness and associate none as a partner in the worship of his Lord.” (Sura Al-Kahf, Ayat 110).

So when we worship we must seek the countenance of Allah (SWT) alone, and strive to follow the Sunnah of the Prophet (pbuh). We ask Allah (SWT) to help us to do righteous deeds.

We should not do deeds so that other people can see us or hear about us and praise about what we do. The Messenger of Allah (pbuh) said, “Whoever talks about his good deeds (to show off), Allah will expose him (on the Day of Resurrection), and whoever makes a (hypocritical) display, Allah will make a display of him.” (Sahih Bukhari 6499, and Sahih Muslim 2987). This Hadith is narrated by Jundub (Ra).

So whoever intends by his deeds to seek high status among people, and does not intend it for the sake of Allah, Allah will cause him to be talked about among those with whom he sought to attain high status, but there will be no reward for him in the hereafter.