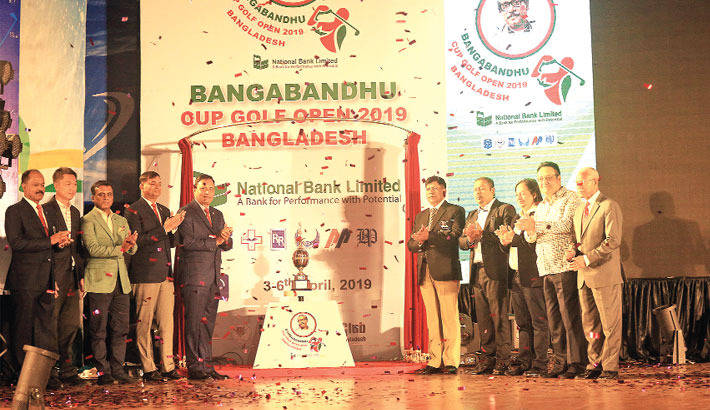 The trophy of the ‘Bangabandhu Cup Golf Open 2019’, an Asian Tour Professional Golf Tournament was unveiled at the Kurmitola Golf Club on Sunday.

For the first time in the history of Bangladesh Golf, the Asian Tour Golf event has been named after Father of the Nation Bangabandhu Sheikh Mujibur Rahman.

Earlier on Thursday, Chief of Army Staff General Aziz Ahmed who is also Bangladesh Golf Federation President unveiled the tournament’s logo at a function at the Banquet Hall of Kurmitola Golf Club on Thursday.

Professional golfers from America, Europe, Australia, Africa and Asia are expected to compete in the tournament from April 3- 6 at the Kurmitola Golf Club, being held under the supervision of Bangladesh Golf Federation with the cooperation of Asian Tour.

The Bangladesh stop has been a part of the Asian Tour since 2015, making this year’s the 5th staging of the tournament at KGC.

A total of 156 golfers from 22 countries, including 40 professional golfers and 6 amateur golfers from home, will take part in the tournament.