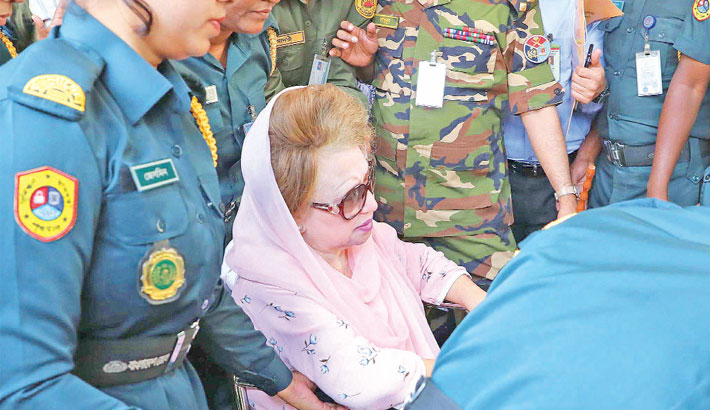 BNP Chairperson Khaleda Zia is being taken to Bangabandhu Sheikh Mujib Medical University (BSMMU) in the capital on to a wheelchair on Monday. —SUN photo

BNP Chairperson Khaleda Zia has been taken to Bangabandhu Sheikh Mujib Medical University (BSMMU) Hospital in the capital on Monday for her medical treatment.

A vehicle of Dhaka Metropolitan Police (DMP) carrying Khaleda Zia from the Dhaka old central jail on Nazimuddin road in the capital reached the hospital around 12:35pm.

After arriving at the hospital, a team of law enforcers took her inside by a wheelchair. She is staying in cabin number 621 of the hospital, BSMMU sources said.

The BNP chairperson will undergo necessary treatment after medical checkup at the hospital.

“She is feeling severe pain in the joints of her hands and legs. Her blood sugar level is little higher. She is also physically weak as she can’t sleep well. She walks by taking support of others,” he said.

Khaleda Zia’s aides will stay at cabin no 602, he also said.

Mahbubul Hoque said he along with the five-member medical board visited the ailing leader at her cabin at around 2 pm.

Meanwhile, after Khaleda Zia’s admission in the hospital, BNP secretary general Mirza Fakhrul Islam Alamgir reiterated their demand of shifting her to any specialised hospital for better treatment.

“We’re seriously worried about her health condition. That’s why we want Khaleda Zia to be taken to a specialised hospital for her proper treatment,” he said while talking to reporters in front of BSMMU’s cabin block on Monday.

The BNP secretary general, however, hoped that the government will put in its all-out efforts to provide Khaleda with the best treatment at the hospital.

“We want the government to create a healthy atmosphere so that Khaleda Zia doesn’t feel she is receiving treatment like other ordinary prisoners,” he said.

The medical board formed with the directive of the High Court directed the jail authorities to ensure treatment to Khlaeda with the consultation of her personal physicians, he also said.

Mirza Fakhrul hoped that the authorities will follow the directives of the medical board.

He said Khaleda Zia’s health condition could have deteriorated further had she not been admitted to the BSMMU hospital on the day.

Earlier on March 10, the hospital authorities had taken all necessary preparations to admit the former premier at the hospital to ensure her better treatment as per a court order. But she reportedly declined to go to BSMMU for receiving treatment.

BNP chairperson Khaleda Zia has been in jail since a special court convicted her in the Zia Orphanage Trust graft case on February 8, 2018.