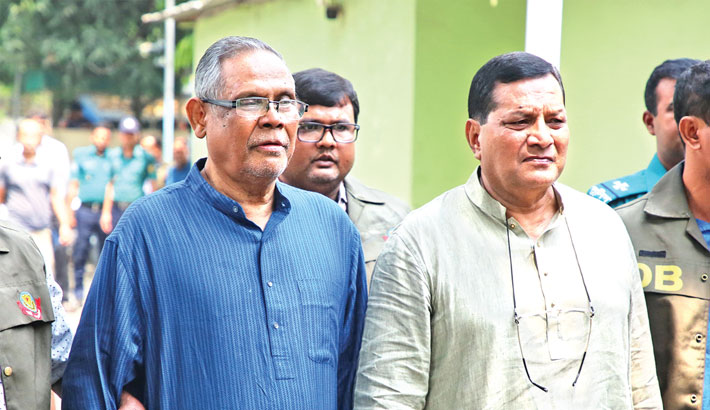 Tasvir Ul Islam and engineer SMHI Faruk -- two of the owners of FR Tower -- come out of a court on Sunday after it placed them on a seven-day remand each over the deadly fire incident at Banani.

Police have been given seven days to grill Tasveer Ul Islam, owner of the illegally-built portion of Faruk Rupayan (FR) Tower in Banani, and SMHI Faruk Hossain, land owner of the high-rise building.

Police arrested Tasveer and Faruk on Saturday night in a case filed over the fire incident. Both were arrested following drives conducted in the capital’s Gulshan, Bashundhara and Baridhara areas.

According to him, a huge loss and major damages were caused due to fault in construction of the tower and lack of emergency exit and fire extinguishers.

He said, “The fire broke out at FR Tower due to negligence of Faruk, Tasveer and Liakat Ali Khan Mukul resulting in death of 26 people and massive loss of assets.”

making money as the owners totally ignored the safety and service issues.

“Drives are going on to arrest Liakat Ali,” he added.

A total of 26 people were killed and 70 others injured in the deadly fire incident on Thursday.