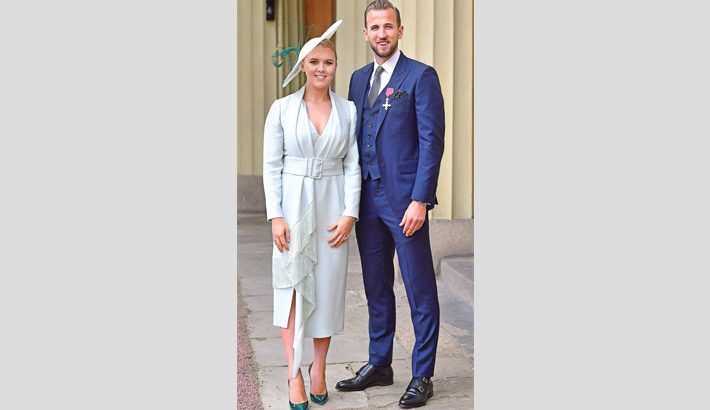 England captain Harry Kane wears his medal as he poses with his partner Kate Goodland, after being appointed Member of the Order of the British Empire (MBE) at an investiture ceremony at Buckingham Palace in London on Thursday. —AFP PHOTO

Prince William, the president of the English Football Association, presented the 25-year-old Tottenham striker with his medal at Buckingham Palace after Kane was included in Queen Elizabeth’s 2019 New Year’s honours list.

He was top scorer with six goals in Russia but the team was knocked out after a 2-1 loss to Croatia in the semi-finals.

Kane attended the ceremony with his fiancee and his parents.

“A real honour and an enormously proud day for me and my family,” he tweeted. “A massive thanks to my England teammates and coaching staff.”

England captain Harry Kane said he would support any of his teammates in walking off the pitch if there was any repeat of Monday’s racist abuse during their win in Montenegro. UEFA have opened an investigation after England players Danny Rose, Raheem Sterling and Callum Hudson-Odoi said they were victims of the abuse in Podgorica.

“It’s terrible, its unacceptable, and I thought our players handled it so well and were so professional and focussed on their job and doing what they do best,” Kane told Sky Sports outside Buckingham Palace where he was receiving an MBE for services to football. “Now it’s up to the people in charge to make sure the right action is taken because it’s not acceptable in football or any part of life.”

Asked if England’s players would walk off the pitch if there was a repeat, Kane said: “Yeah, well I’m supportive of my team mates and if it happened again and they weren’t happy and wanted to talk about it or take a breather I would fully back them,” the Tottenham Hotspur striker said.

“We are a team, a unit and we stick behind all of our players. Hopefully it will never happen again but if it did, I would take their lead on that and whatever they wanted we would support them in that.”

UEFA’s Control, Ethics and Disciplinary panel will hear the case against Montenegro on May 16.