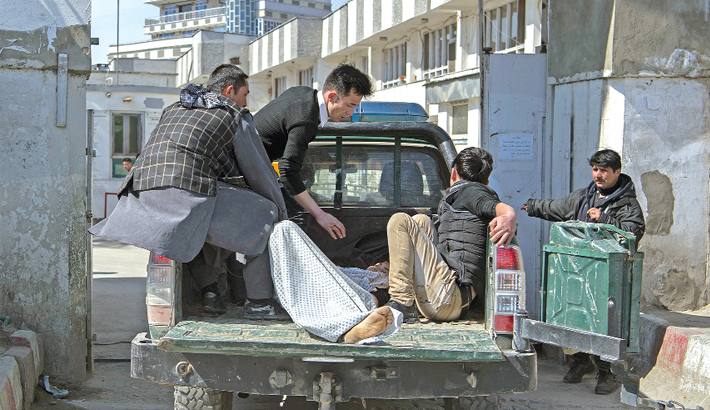 Afghan volunteers transport a victim on a police vehicle to Isteqlal Hospital following two blasts that struck a large ceremony in Kabul on Thursday. An explosion rattled a large ceremony in western Kabul on the day, with the event abruptly cancelled and sending attendees fleeing—including chief executive Abdullah Abdullah and other leading government officials. But moments after the announcement, another explosion could be heard that sent people running for the exit. - AFP PHOTO

The Kabul attack represents a major security breach and marks a resumption of violence in the capital after weeks of calm amid ongoing peace talks between the US and Taliban in Doha.

“Stay calm, the area of the blast is far from us,” said former lower house speaker Mohammad Younus Qanooni from the stage during a live broadcast of the outdoor event. But moments after the announcement, another explosion and gunfire could be heard that sent people running.

A second unidentified voice then addressed the screaming crowd, saying: “I request my countrymen to stay calm. The mortar attack is far from the gathering.”

The blasts happened during a ceremony marking the 24th anniversary of the death of Shiite Hazara leader Abdul Ali Mazari that was attended by many of the country’s political elite, including Abdullah and former president Hamid Karzai.